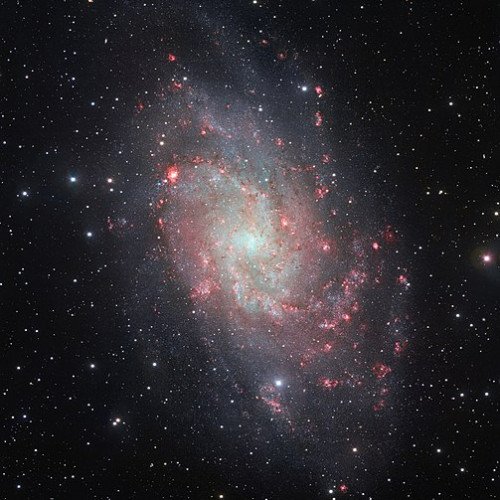 The Triangulum Galaxy is a spiral galaxy 2.73 million light-years (ly) from Earth in the constellation Triangulum. It is catalogued as Messier 33 or NGC 598. The Triangulum Galaxy is the third-largest member of the Local Group of galaxies, behind the Milky Way and the Andromeda Galaxy (the largest). It is one of the most distant permanent objects that can be viewed with the naked eye. The galaxy is the smallest spiral galaxy in the Local Group and is believed to be a satellite of the Andromeda Galaxy or on its rebound into the latter due to their interactions, velocities, and proximity to one another in the night sky. It also has an H II nucleus. The galaxy gets its name from the constellation Triangulum, where it can be spotted. It is sometimes informally referred to as the "Pinwheel Galaxy" by some amateur astronomy references, in some computerized telescope software, and in some public outreach websites. However, the SIMBAD Astronomical Database, a professional database, collates formal designations for astronomical objects and indicates that Pinwheel Galaxy refers to Messier 101, which several amateur astronomy resources including public outreach websites identify by that name, and that is within the bounds of Ursa Major. 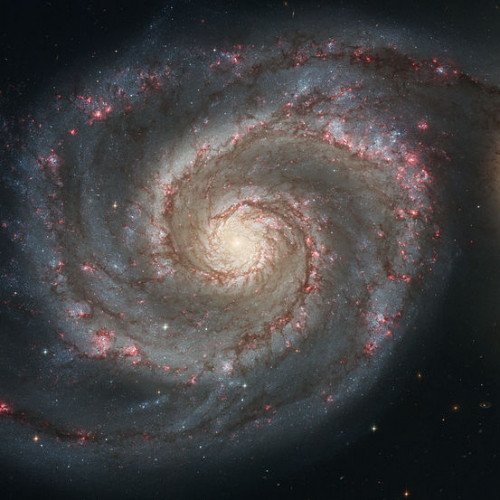 The Whirlpool Galaxy, also known as Messier 51a, M51a, and NGC 5194, is an interacting grand-design spiral galaxy with a Seyfert 2 active galactic nucleus. It lies in the constellation Canes Venatici, and was the first galaxy to be classified as a spiral galaxy. Its distance is estimated to be 31 million light-years away from Earth. The galaxy and its companion, NGC 5195, are easily observed by amateur astronomers, and the two galaxies may be seen with binoculars. The Whirlpool Galaxy has been extensively observed by professional astronomers, who study it to understand galaxy structure (particularly structure associated with the spiral arms) and galaxy interactions. What later became known as the Whirlpool Galaxy was discovered on October 13, 1773, by Charles Messier while hunting for objects that could confuse comet hunters, and was designated in Messier's catalogue as M51. Its companion galaxy, NGC 5195, was discovered in 1781 by Pierre Méchain, although it was not known whether it was interacting or merely another galaxy passing at a distance. In 1845, William Parsons, 3rd Earl of Rosse, employing a 72-inch (1.8 m) reflecting telescope at Birr Castle, Ireland, found that the Whirlpool possessed a spiral structure, the first "nebula" to be known to have one. These "spiral nebulae" were not recognized as galaxies until Edwin Hubble was able to observe Cepheid variables in some of these spiral nebulae, which provided evidence that they were so far away that they must be entirely separate galaxies even though they are seen close together.