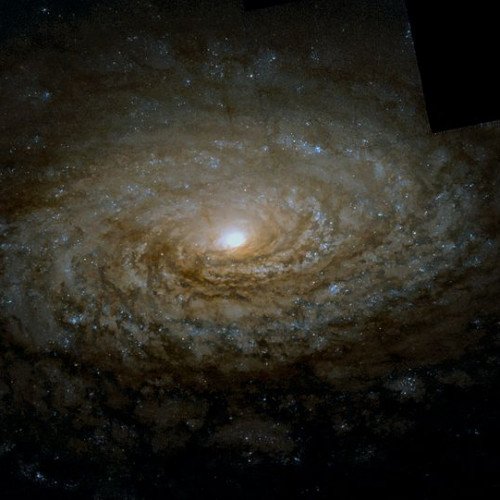 Messier 63 or M63, also known as NGC 5055 or the seldom-used Sunflower Galaxy, is a spiral galaxy in the northern constellation of Canes Venatici with approximately 400 billion stars. M63 was first discovered by the French astronomer Pierre Méchain, then later verified by his colleague Charles Messier on June 14, 1779. The galaxy became listed as object 63 in the Messier Catalogue. In the mid-19th century, Anglo-Irish astronomer Lord Rosse identified spiral structures within the galaxy, making this one of the first galaxies in which such structure was identified. The shape or morphology of this galaxy has a classification of SAbc, indicating a spiral form with no central bar feature (SA) and moderate to loosely wound arms (bc). There is a general lack of large-scale continuous spiral structure in visible light, so it is considered a flocculent galaxy. However, when observed in the near infrared, a symmetric, two-arm structure is seen. Each arm wraps 150° around the galaxy and extends out to 13,000 light-years (4,000 parsecs) from the nucleus. M63 is a weakly active galaxy with a LINER nucleus – short for 'low-ionization nuclear emission-line region'. This displays as an unresolved source at the galactic nucleus that is cloaked in a diffuse emission. The latter is extended along a position angle of 110° relative to the north celestial pole, and both soft X-rays and hydrogen (H-alpha) emission can be observed coming from along nearly the same direction. The existence of a super massive black hole (SMBH) at the nucleus is uncertain; if it does exist, then the mass is estimated as (8.5±1.9)×108 M☉, or around 850 million times the mass of the Sun. Radio observations at the 21-cm hydrogen line show the gaseous disk of M63 extends outward to a radius of 130,000 light-years (40 kiloparsecs), well past the bright optical disk. This gas shows a symmetrical form that is warped in a pronounced manner, starting at a radius of 33,000 light-years (10 kiloparsecs). The form suggests a dark matter halo that is offset with respect to the inner region. The reason for the warp is unclear, but the position angle points toward the smaller companion galaxy, UGC 8313. 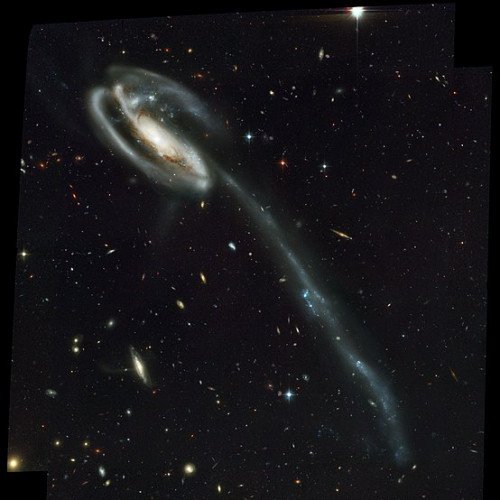 The Tadpole Galaxy is a disrupted barred spiral galaxy located 420 million light-years from Earth in the northern constellation Draco. Its most dramatic feature is a massive trail of stars about 280,000 light-years long; the size of the galaxy has been attributed to a merger with a smaller galaxy that is believed to have occurred about 100 million years ago. The galaxy is filled with bright blue star clusters. It is hypothesized that a more compact intruder galaxy crossed in front of the Tadpole Galaxy—from left to right from the perspective of Earth—and was slung around behind the Tadpole by their mutual gravitational attraction. During this close encounter, tidal forces drew out the spiral galaxy's stars, gas, and dust, forming the conspicuous tail. The intruder galaxy itself, estimated to lie about 300 thousand light-years behind the Tadpole, can be seen through foreground spiral arms at the upper left. Following its terrestrial namesake, the Tadpole Galaxy will likely lose its tail as it grows older; the tail's star clusters forming smaller satellites of the large spiral galaxy.