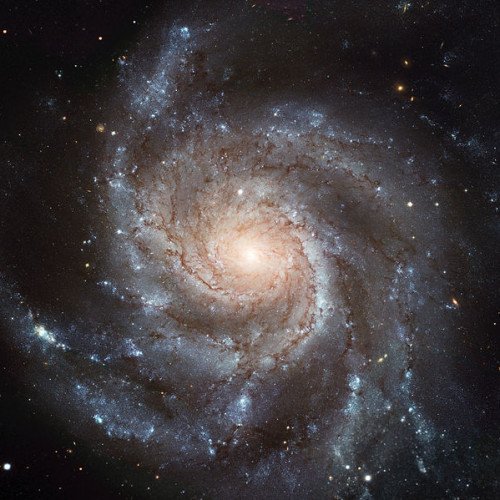 The Pinwheel Galaxy (also known as Messier 101, M101 or NGC 5457) is a face-on spiral galaxy 21 million light-years (6.4 megaparsecs)away from Earth in the constellation Ursa Major. It was discovered by Pierre Méchain in 1781 and was communicated that year to Charles Messier, who verified its position for inclusion in the Messier Catalogue as one of its final entries. On February 28, 2006, NASA and the European Space Agency released a very detailed image of the Pinwheel Galaxy, which was the largest and most-detailed image of a galaxy by Hubble Space Telescope at the time. The image was composed of 51 individual exposures, plus some extra ground-based photos. On August 24, 2011, a Type Ia supernova, SN 2011fe, was discovered in M101. Pierre Méchain, the discoverer of Messier 101, described it as a "nebula without star, very obscure and pretty large, 6' to 7' in diameter, between the left hand of Bootes and the tail of the great Bear. It is difficult to distinguish when one lits the wires." William Herschel noted in 1784 that "...in my 7-, 10-, and 20-feet reflectors shewed a mottled kind of nebulosity, which I shall call resolvable; so that I expect my present telescope will, perhaps, render the stars visible of which I suppose them to be composed." Lord Rosse observed M101 in his 72-inch-diameter Newtonian reflector during the second half of the 19th century. He was the first to make extensive note of the spiral structure and made several sketches. To observe the spiral structure in modern instruments requires a fairly large instrument, very dark skies, and a low-power eyepiece. 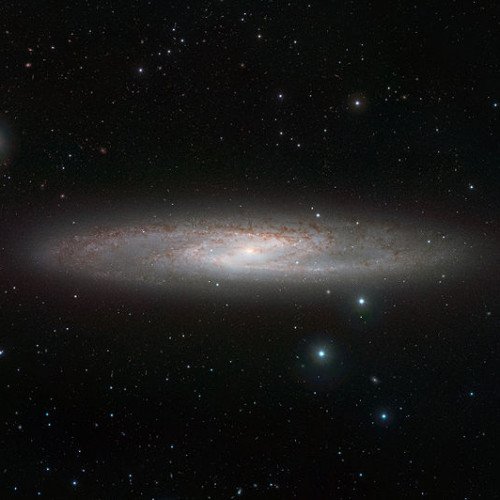 The Sculptor Galaxy (also known as the Silver Coin, Silver Dollar Galaxy, NGC 253, or Caldwell 65) is an intermediate spiral galaxy in the constellation Sculptor. The Sculptor Galaxy is a starburst galaxy, which means that it is currently undergoing a period of intense star formation. The galaxy was discovered by Caroline Herschel in 1783 during one of her systematic comet searches. About half a century later, John Herschel observed it using his 18-inch metallic mirror reflector at the Cape of Good Hope. He wrote: "very bright and large (24′ in length); a superb object.... Its light is somewhat streaky, but I see no stars in it except 4 large and one very small one, and these seem not to belong to it, there being many near..." In 1961, Allan Sandage wrote in the Hubble Atlas of Galaxies that the Sculptor Galaxy is "the prototype example of a special subgroup of Sc systems....photographic images of galaxies of the group are dominated by the dust pattern. Dust lanes and patches of great complexity are scattered throughout the surface. Spiral arms are often difficult to trace.... The arms are defined as much by the dust as by the spiral pattern." Bernard Y. Mills, working out of Sydney, discovered that the Sculptor Galaxy is also a fairly strong radio source. In 1998, the Hubble Space Telescope took a detailed image of NGC 253.