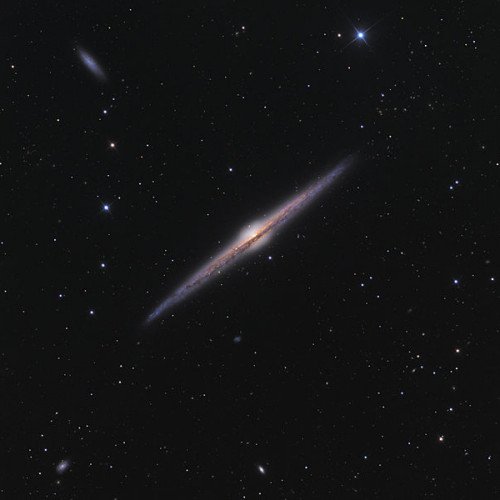 NGC 4565 (also known as the Needle Galaxy or Caldwell 38) is an edge-on spiral galaxy about 30 to 50 million light-years away in the constellation Coma Berenices. It lies close to the North Galactic Pole and has a visual magnitude of approximately 10. It is known as the Needle Galaxy for its narrow profile. First recorded in 1785 by William Herschel, it is a prominent example of an edge-on spiral galaxy. NGC 4565 is a giant spiral galaxy more luminous than the Andromeda Galaxy. Much speculation exists in literature as to the nature of the central bulge. In the absence of clear-cut dynamical data on the motions of stars in the bulge, the photometric data alone cannot adjudge among various options put forth. However, its exponential shape suggested that it is a barred spiral galaxy. Studies with the help of the Spitzer Space Telescope not only confirmed the presence of a central bar but also showed a pseudobulge within it as well as an inner ring. NGC 4565 has at least two satellite galaxies, one of which is interacting with it. It has a population of roughly 240 globular clusters, more than the Milky Way. NGC 4565 is one of the brightest member galaxies of the Coma I Group. This edge-on galaxy exhibits a slightly warped and extended disk under deep optical surveys- likely due to ongoing interactions with neighboring satellite galaxies or other galaxies in the Coma I group. The GALEX image shown below highlights the slight warp at the edge of the disc more clearly than other surveys. 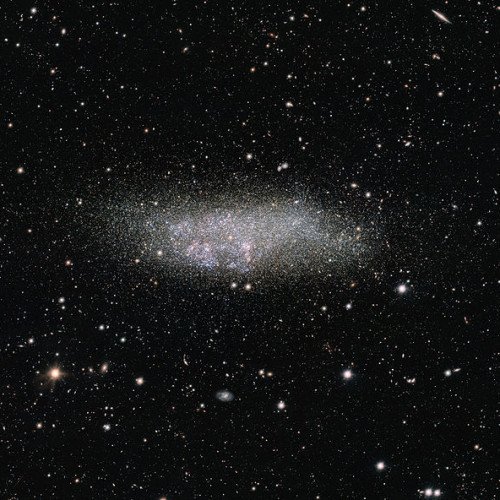 The Wolf–Lundmark–Melotte (WLM) is a barred irregular galaxy discovered in 1909 by Max Wolf, located on the outer edges of the Local Group. The discovery of the nature of the galaxy was accredited to Knut Lundmark and Philibert Jacques Melotte in 1926. It is in the constellation Cetus. In 1994, A. E. Dolphin used the Hubble Space Telescope to create a color–magnitude diagram for WLM. It showed that around half of all the star formation in this galaxy occurred during a starburst that started ~13 Gyr ago. During the starburst, the metallicity of WLM rose from [Fe/H] ~ −2.2 to [Fe/H] −1.3. There being no horizontal-branch population, Dolphin concludes that no more than ~20 M☉ per Myr of star formation occurred in the period from 12 to 15 Gyr ago. From 2.5 to 9 Gyr ago, the mean rate of star formation was 100 to 200 M☉ per Myr. Being at the edge of the Local Group has also protected WLM from interactions and mergers with other galaxies, giving it a "pristine" stellar population and state that make it particularly useful for comparative studies.