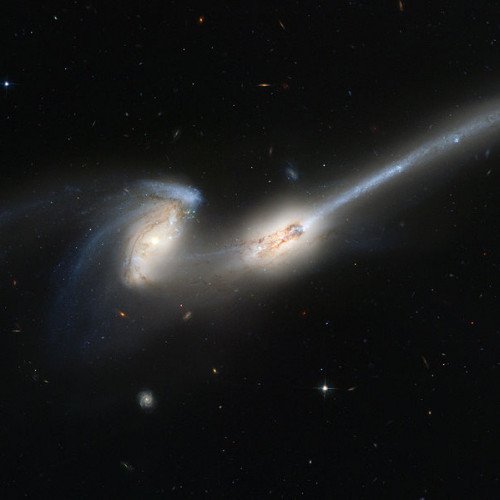 NGC 4676, or the Mice Galaxies, are two spiral galaxies in the constellation Coma Berenices. About 290 million light-years away, they began the process of colliding and merging. Their name refers to the long tails produced by tidal action—the relative difference between gravitational pulls on the near and far parts of each galaxy—known here as a galactic tide. It is a possibility that both galaxies, which are members of the Coma cluster, have experienced collision, and will continue colliding until they coalesce. The colors of the galaxy are peculiar. In NGC 4676A a core with some dark markings is surrounded by a bluish white remnant of spiral arms. The tail is unusual, starting out blue and terminating in a more yellowish color, despite the fact that the beginning of each arm in virtually every spiral galaxy starts yellow and terminates in a bluish color. NGC 4676B has a yellowish core and two arcs; arm remnants underneath are bluish as well. The galaxies were photographed in 2002 by the Hubble Space Telescope. In the background of the Mice Galaxies, there are at least 3300 galaxies, at distances up to 13 billion light-years. 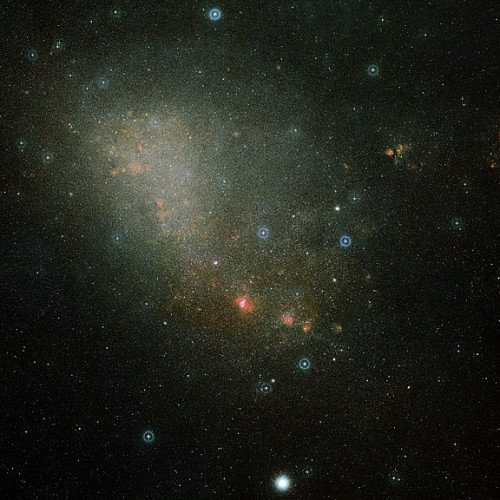 The Small Magellanic Cloud (SMC), or Nubecula Minor, is a dwarf galaxy near the Milky Way. Classified as a dwarf irregular galaxy, the SMC has a diameter of about 7,000 light-years, contains several hundred million stars, and has a total mass of approximately 7 billion solar masses. The SMC contains a central bar structure, and astronomers speculate that it was once a barred spiral galaxy that was disrupted by the Milky Way to become somewhat irregular. At a distance of about 200,000 light-years, the SMC is among the nearest intergalactic neighbors of the Milky Way and is one of the most distant objects visible to the naked eye. The SMC is visible from the entire Southern Hemisphere, but can be fully glimpsed low above the southern horizon from latitudes south of about 15° north. The galaxy is located across both the constellations of Tucana and part of Hydrus, appearing as a faint hazy patch resembling a detached piece of the Milky Way. The SMC has an average apparent diameter of about 4.2° (8 times the Moon's) and thus covers an area of about 14 square degrees (70 times the Moon's). Since its surface brightness is very low, this deep-sky object is best seen on clear moonless nights and away from city lights. The SMC forms a pair with the Large Magellanic Cloud (LMC), which lies 20° to the east, and like the LMC, is a member of the Local Group and highly probably is a former satellite of the Large Magellanic Cloud and a current satellite of the Milky Way.