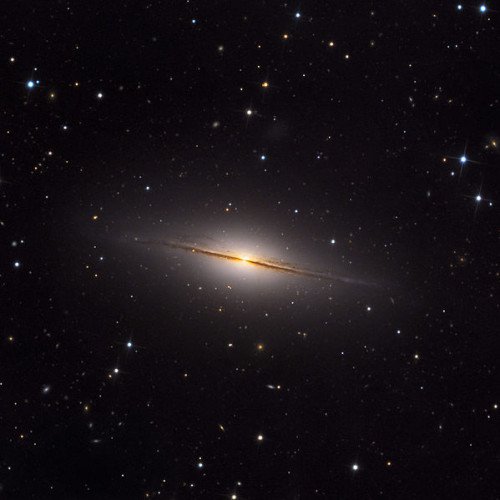 NGC 7814 (also known as UGC 8 or Caldwell 43) is a spiral galaxy about 40 million light-years away in the constellation Pegasus. The galaxy is seen edge-on from Earth. It is sometimes referred to as "the little sombrero", a miniature version of Messier 104. The star field behind NGC 7814 is known for its density of faint, remote galaxies as can be seen in the image here – in the same vein as the Hubble Deep Field. 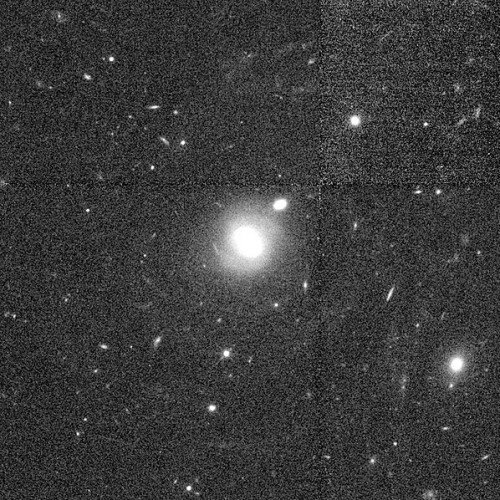 Malin 1 is a giant low surface brightness (LSB) spiral galaxy. It is located 1.19 billion light-years (366 Mpc) away in the constellation Coma Berenices, near the North Galactic Pole. As of February 2015, it is the largest known spiral galaxy, with an approximate diameter of 650,000 light-years (200,000 pc), thus over three times the diameter of our Milky Way. It was discovered by astronomer David Malin in 1986 and is the first LSB galaxy verified to exist. Its high surface brightness central spiral is 30,000 light-years (9,200 pc) across, with a bulge of 10,000 light-years (3,100 pc). The central spiral is a SB0a type barred-spiral. Malin 1 is peculiar in several ways: its diameter alone would make it the largest barred spiral galaxy ever to have been observed. Malin 1 was found later to be interacting with two other galaxies, Malin 1B and SDSS J123708.91+142253.2. Malin 1B is located 46,000 light-years (14,000 pc) away from the high surface brightness central spiral of Malin 1, which may be responsible for the formation of the galaxy's central bar. Meanwhile, SDSS J123708.91+142253.2 is located within the huge, faint halo of Malin 1 and might have caused the formation of the extended low surface brightness disc through tidal stripping. Observations by Galaz et al. in April 2014 revealed a detailed view of the spiral structure of Malin 1 in optical bands. The galaxy exhibits giant and very faint spiral arms, with some segments up to 33,000 light-years (10,000 pc) in diameter. Other details, such as possible stellar streams and formation regions, are revealed as well.