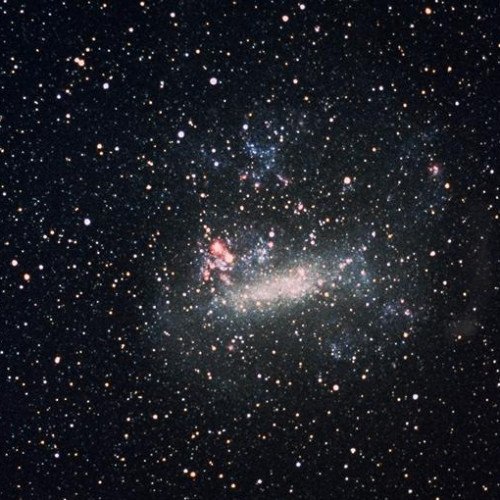 The Large Magellanic Cloud (LMC) is a satellite galaxy of the Milky Way. At a distance of around 50 kiloparsecs (≈160,000 light-years), the LMC is the second or third closest galaxy to the Milky Way, after the Sagittarius Dwarf Spheroidal (~16 kpc) and the possible dwarf irregular galaxy known as the Canis Major Overdensity. Based on readily visible stars and a mass of approximately 10 billion solar masses, the diameter of the LMC is about 14,000 light-years (4.3 kpc). It is roughly a hundredth as massive as the Milky Way and is the fourth largest galaxy in the Local Group, after the Andromeda Galaxy (M31), the Milky Way, and the Triangulum Galaxy (M33). The LMC is classified as a Magellanic spiral. It contains a stellar bar that is geometrically off center, suggesting that it was a barred dwarf spiral galaxy before its spiral arms were disrupted, likely by tidal interactions from the Small Magellanic Cloud (SMC) and the Milky Way's gravity. With a declination of about −70°, the LMC is visible as a faint "cloud" from the southern hemisphere of the Earth and from as far north as 20° N. It straddles the constellations Dorado and Mensa and has an apparent length of about 10° to the naked eye, 20 times the Moon's diameter, from dark sites away from light pollution. 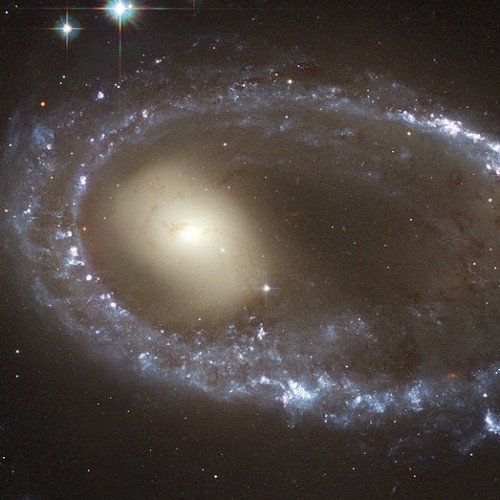 AM 0644-741, also known as the Lindsay-Shapley Ring, is an unbarred lenticular galaxy, and a ring galaxy, which is 300 million light-years away in the southern constellation Volans. The yellowish nucleus was once the center of a normal spiral galaxy, and the ring which currently surrounds the center is 150,000 light years in diameter. The ring is theorized to have formed by a collision with another galaxy, which triggered a gravitational disruption that caused dust in the galaxy to condense and form stars, which forced it to then expand away from the galaxy and create a ring. The ring is a region of rampant star formation dominated by young, massive, hot blue stars. The pink regions along the ring are rarefied clouds of glowing hydrogen gas that is fluorescing as it is bombarded with strong ultraviolet light from the blue stars.