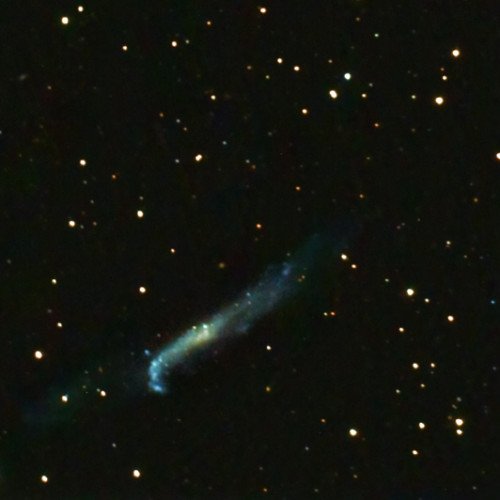 NGC 4656/57 is a highly warped barred spiral galaxy located in the constellation Canes Venatici and is sometimes informally called the Hockey Stick Galaxies or the Crowbar Galaxy. The galaxy is a member of the NGC 4631 Group. A Luminous Blue Variable in "super-outburst" was discovered in NGC 4656/57 on March 21, 2005. 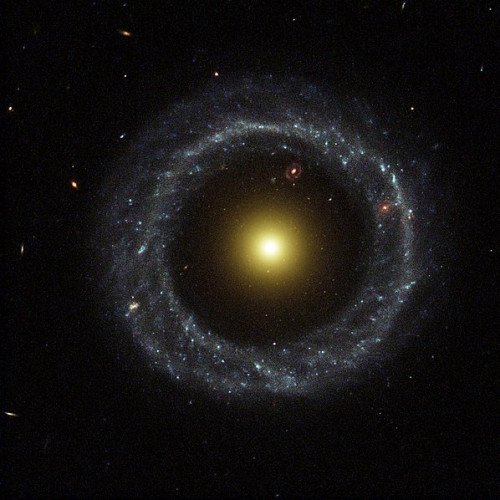 Hoag's Object is a non-typical galaxy of the type known as a ring galaxy. The galaxy is named after Arthur Hoag who discovered it in 1950 and identified it as either a planetary nebula or a peculiar galaxy with eight billion stars, spanning roughly 100,000 light years. A nearly perfect ring of young hot blue stars circles the older yellow nucleus of this ring galaxy c. 600 million light-years away in the constellation Serpens. The diameter of the 6 arcsecond inner core of the galaxy is about 17±0.7 kly (5.3±0.2 kpc) while the surrounding ring has an inner 28″ diameter of 75±3 kly (24.8±1.1 kpc) and an outer 45″ diameter of 121±4 kly (39.9±1.7 kpc). The galaxy is estimated to have a mass of 700 billion suns. By way of comparison, the Milky Way galaxy has an estimated diameter of 150-200 kly and consists of between 100 and 500 billion stars and a mass of around 1.54 trillion suns. The gap separating the two stellar populations may contain some star clusters that are almost too faint to see. Though ring galaxies are rare, another more distant ring galaxy (SDSS J151713.93+213516.8) can be seen through Hoag's Object, between the nucleus and the outer ring of the galaxy, at roughly the one o'clock position in the image shown here. Noah Brosch and colleagues showed that the luminous ring lies at the inner edge of a much larger neutral hydrogen ring.