"EYE OF SAURON" vs "FIREWORKS GALAXY" 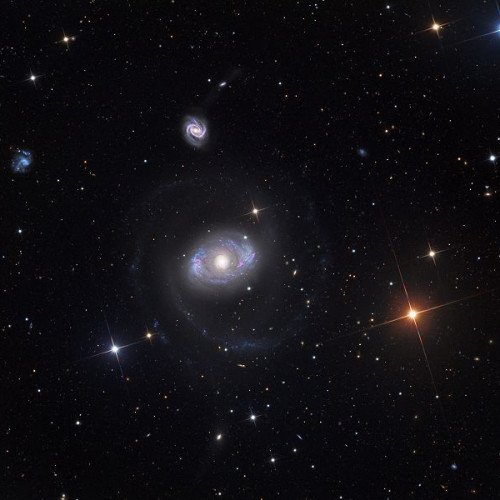 NGC 4151 is an intermediate spiral Seyfert galaxy with weak inner ring structure located 15.8 megaparsecs (52 million light-years) from Earth in the constellation Canes Venatici. The galaxy was first mentioned by William Herschel on March 17, 1787; it was one of the two Seyfert galaxies described in the paper which defined the term. It is one of the nearest galaxies to Earth to contain an actively growing supermassive black hole; it was speculated that the nucleus may host a binary black hole, with about 40 million and about 10 million solar masses respectively, orbiting with a 15.8-year period. This is, however, still a matter of active debate. X-ray emission from NGC 4151 was apparently first detected on December 24, 1970, with the X-ray observatory satellite Uhuru, although the observation spanned an error-box of 0.56 square degrees and there is some controversy as to whether UHURU might not have detected the BL Lac object 1E 1207.9 +3945, which is inside their error box - the later HEAO 1 detected an X-ray source of NGC 4151 at 1H 1210+393, coincident with the optical position of the nucleus and outside the error box of Uhuru. 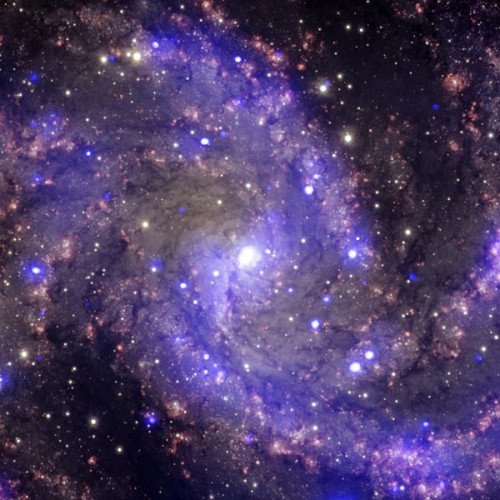 NGC 6946, also known as the Fireworks Galaxy or Caldwell 12, is a face-on intermediate spiral galaxy with a small bright nucleus, whose location in the sky straddles the boundary between the northern constellations of Cepheus and Cygnus. Its distance from Earth is about 25.2 million light-years or 7.72 megaparsecs, similar to the distance of M101 (NGC 5457) in the constellation Ursa Major. Both were once considered to be part of the Local Group, but are now known to be among the dozen bright spiral galaxies near the Milky Way but beyond the confines of the Local Group. NGC 6946 lies within the Virgo Supercluster. Discovered by William Herschel on 9 September 1798, this well-studied galaxy has a diameter of approximately 40,000 light-years, about one-third of the Milky Way's size, and it contains roughly half the number of stars as the Milky Way. It is heavily obscured by interstellar matter due to its location close to the galactic plane of the Milky Way, with a dimming of ~1.5 magnitudes. Due to its prodigious star formation it has been classified as an active starburst galaxy. Various unusual celestial objects have been observed within NGC 6946. This includes the so-called 'Red Ellipse' along one of the northern arms that looks like a super-bubble or very large supernova remnant, and which may have been formed by an open cluster containing massive stars. There are also two regions of unusual dark lanes of nebulosity, while within the spiral arms several regions appear devoid of stars and gaseous hydrogen, some spanning up to two kiloparsecs across. A third peculiar object, discovered in 1967, is now known as "Hodge's Complex". This was once thought to be a young supergiant cluster, but in 2017 it was conjectured to be an interacting dwarf galaxy superimposed on NGC 6946.