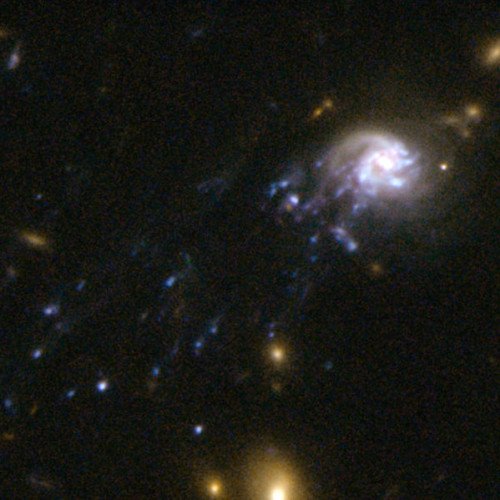 The Comet Galaxy, a spiral galaxy located 3.2 billion light-years from Earth, in the galaxy cluster Abell 2667, was found with the Hubble Space Telescope. This galaxy has slightly more mass than our Milky Way. It was detected on 2 March 2007. This unique spiral galaxy, which is situated 3.2 billion light-years from the Earth, has an extended stream of bright blue knots and diffuse wisps of young stars. It rushes at 3.5 million km/h through the cluster Abell 2667 and therefore, like a comet, shows a tail, with a length of 600,000 light-years. The Сomet Galaxy is currently being ripped to pieces, moving through a cluster at speeds of greater than 2 million mph. As the galaxy speeds through, its gas and stars are being stripped away by the tidal forces exerted by the cluster. Also contributing to this destructive process is the pressure of the cluster's hot gas plasma reaching temperatures as high as 100 million degrees. Scientists estimate that the total duration of the transformation process is close to one billion years. What is seen now in the Hubble's image is roughly 200 million years into the process. Even though the Comet Galaxy's mass is slightly greater than the Milky Way, it will lose all its gas and dust, and so not be able to generate stars later in life. It will become a gas-poor galaxy with an old population of red stars. During the ram pressure stripping process, the charged particles strip and push away the infalling galaxy's gas, just as the solar wind of charged particles pushes ionized gas away from a comet to create a gas tail. For this reason the scientists have nicknamed the stretched spiral the "comet galaxy." "This unique galaxy, situated 3.2 billion light-years from Earth, has an extended stream of bright blue knots and diffuse wisps of young stars driven away by the tidal forces and the ram pressure stripping of the hot dense gas," said Jean-Paul Kneib, a study collaborator from the Laboratoire d'Astrophysique de Marseille. 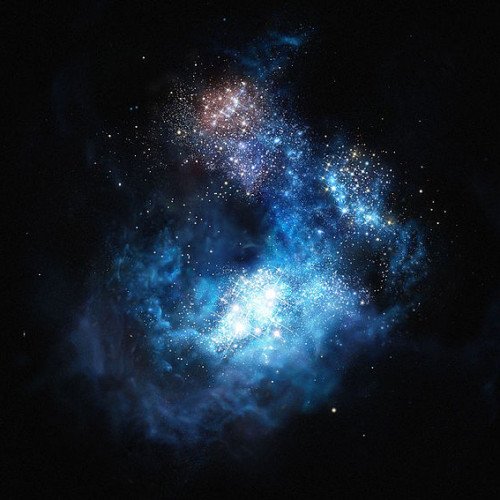 Cosmos Redshift 7 (also known as COSMOS Redshift 7, Galaxy Cosmos Redshift 7, Galaxy CR7 or CR7) is a high-redshift Lyman-alpha emitter galaxy. At a redshift z = 6.6, the galaxy is observed as it was about 800 million years after the Big Bang, during the epoch of reionisation. With a light travel time of 12.9 billion years, it is one of the oldest, most distant galaxies known. CR7 shows some of the expected signatures of Population III stars i.e. the first generation of stars produced during early galaxy formation. These signatures were detected in a bright pocket of blue stars; the rest of the galaxy contains redder Population II stars. Galaxy Cosmos Redshift 7 contains old Population II (metal-poor) and possibly Population III (stars with extremely poor metallicity), according to astronomers, and is three times brighter than the brightest distant galaxies (redshift, z > 6) detected up to the time of its discovery. Astronomers led by David Sobral, a Reader in Astrophysics at the University of Lancaster, used the Very Large Telescope (VLT) at the European Southern Observatory—with help from the W. M. Keck Observatory, Subaru Telescope and the NASA/ESA Hubble Space Telescope—made the discovery. The research team included members of the University of California, Riverside, University of Geneva, University of Leiden and University of Lisbon. The name of the galaxy (Cosmos Redshift 7 Galaxy) was inspired by professional football player Cristiano Ronaldo, who is also popularly known as CR7.