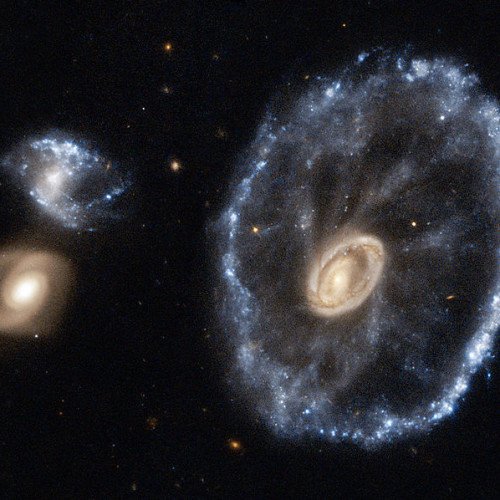 The Cartwheel Galaxy (also known as ESO 350-40 or PGC 2248) is a lenticular galaxy and ring galaxy about 500 million light-years away in the constellation Sculptor. It is an estimated 150,000 light-years diameter, and has a mass of about 2.9–4.8 × 109 solar masses; its outer ring has a circular velocity of 217 km/s. It was discovered by Fritz Zwicky in 1941. Zwicky considered his discovery to be "one of the most complicated structures awaiting its explanation on the basis of stellar dynamics." An estimation of the galaxy's span resulted in a conclusion of 150,000 light years, which is a moderate amount smaller than the Milky Way. The large Cartwheel galaxy is the dominant member of the Cartwheel galaxy group, which consists of four physically associated spiral galaxies. The three companions are referred to in several studies as G1 - the smaller irregular blue Magellanic spiral, G2 - the yellow compact spiral with a tidal tail, and G3 - a more distant spiral often seen in wide field images. The structure of the Cartwheel galaxy is noted to be extremely complicated and heavily disturbed. The Cartwheel consists of two rings - the outer blue ring, the site of massive ongoing star formation due to gas and dust compression, and the inner yellow nucleic ring that surrounds the galactic center. A ring of dark absorbing dust is also present in the nucleic ring. Several optical arms or “spokes” are seen connecting the outer ring to the inner, and are theorized to be reforming spiral arms following the collision. Observations show the presence of both non-thermal radio and optical spokes, but the two do not overlap and have been shown to be unassociated with each other and thus are different structures. 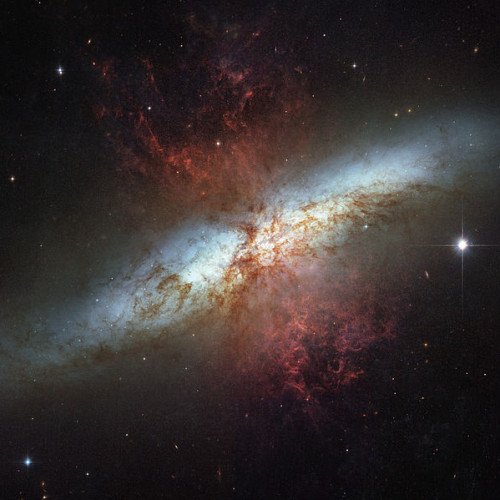 Messier 82 (also known as NGC 3034, Cigar Galaxy or M82) is a starburst galaxy approximately 12 million light-years away in the constellation Ursa Major. A member of the M81 Group, it is about five times more luminous than the Milky Way and has a center one hundred times more luminous. The starburst activity is thought to have been triggered by interaction with neighboring galaxy M81. As the closest starburst galaxy to Earth, M82 is the prototypical example of this galaxy type. SN 2014J, a type Ia supernova, was discovered in the galaxy on 21 January 2014. In 2014, in studying M82, scientists discovered the brightest pulsar yet known, designated M82 X-2. M82 was believed to be an irregular galaxy. In 2005, however, two symmetric spiral arms were discovered in near-infrared (NIR) images of M82. The arms were detected by subtracting an axisymmetric exponential disk from the NIR images. Even though the arms were detected in NIR images, they are bluer than the disk. The arms had been missed due to M82's high disk surface brightness, the nearly edge-on view of this galaxy (~80°), and obscuration by a complex network of dusty filaments in its optical images. These arms emanate from the ends of the NIR bar and can be followed for the length of 3 disc scales. Assuming that the northern part of M82 is nearer to us, as most of the literature does, the observed sense of rotation implies trailing arms.