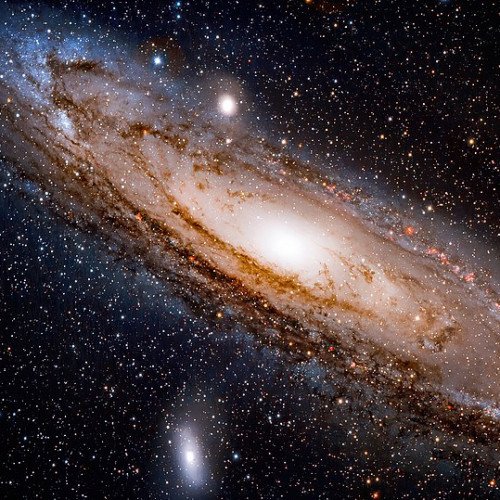 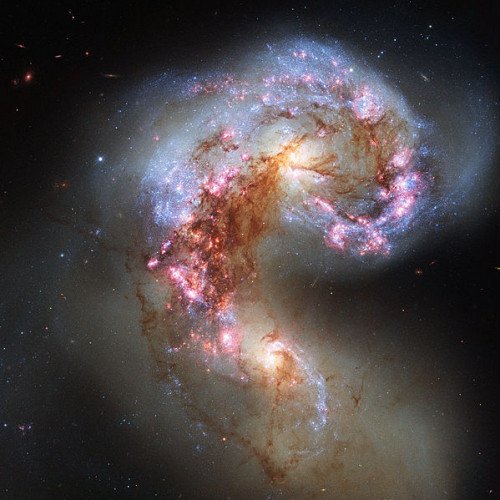 The Antennae Galaxies (also known as NGC 4038/NGC 4039 or Caldwell 60/Caldwell 61) are a pair of interacting galaxies in the constellation Corvus. They are currently going through a starburst phase, in which the collision of clouds of gas and dust, with entangled magnetic fields, causes rapid star formation. They were discovered by William Herschel in 1785. The Antennae Galaxies are undergoing a galactic collision. Located in the NGC 4038 group with five other galaxies, these two galaxies are known as the Antennae Galaxies because the two long tails of stars, gas and dust ejected from the galaxies as a result of the collision resemble an insect's antennae. The nuclei of the two galaxies are joining to become one giant galaxy. Most galaxies probably undergo at least one significant collision in their lifetimes. This is likely the future of our Milky Way when it collides with the Andromeda Galaxy. Five supernovae have been discovered in NGC 4038: SN 1921A, SN 1974E, SN 2004GT, SN 2007sr and SN 2013dk. A recent study finds that these interacting galaxies are less remote from the Milky Way than previously thought—at 45 million light-years instead of 65 million light-years. They are located 0.25° north of 31 Crateris and 3.25° southwest of Gamma Corvi.