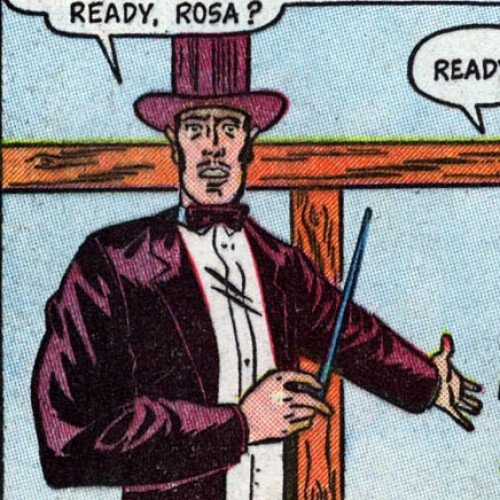 The Great Bardello was a travelling magician who operated during the days of the American Frontier. With his travelling show, he put on feats of magic along with other performers. His supporting cast included his stage assistant Rosa, Lusto the strong man, and others. Their performances were a ruse to distract locals and lawkeepers and hide their real intentions for being in a given town: to rob coaches. Their scheme was perfect until the day they rode into the town of Red Dog, Texas, hope of sheriff Blaze Carson. While Bardello put on his performance -- making sure to include Blaze in one of his tricks -- he sent his minions to rob a Well Fargo wagon that was coming into town with the payroll for the local railroad. After the robbery the performance was interrupted and while Blaze and the locals formed a posse to go looking for those responsible, Bardello and his minions planned a hasty get away. Suspecting nothing was as it seems, Blaze rode back to town and caught Bardello and his men bickering over each others cut of the theft. Blaze then confronted them, taking out Lusto and the other men while Bardello attempted to flee the scene. Blaze made short work of Bardello's cohorts and then knocked the magician out with a single punch. The posse soon returned to town and helped Blaze wrap up the gang. 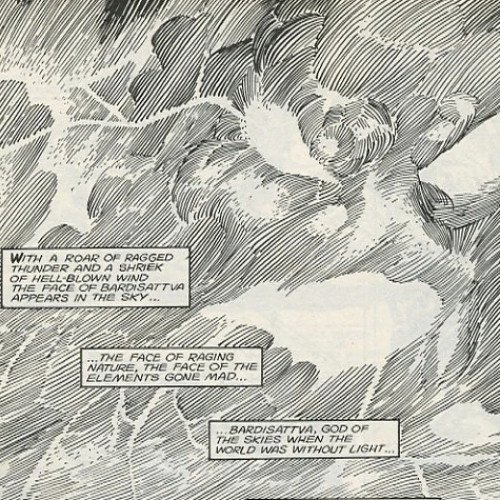 Bardisattva, the Very Old, or Bardis, was an elder god in the Hyborian Age, worshiped as the god of the skies and ages by the Hyperboreans of the Coya Clan,[1] and by the Silent Followers. The Silent Followers of Bardisattva were cultists with stitched lips, as their god "[took] their mouths in exchange for enlightenment and clarity of purpose". Bardisattva was created in Savage Sword of Conan #178 (October, 1990), written by Chuck Dixon and penciled by Mike Docherty. Bardisattva's name was possibly inspired by Bodhisattva, a person of enlightenment and wisdom from Budhist religion. Bardisattva was mentioned in Conan the Barbarian (Vol. 3) #14 (March 18, 2020), written by Jim Zub, who wanted a silent character in the story, and did some digging and found "this old continuity thread of a god that mutes its followers and thought that would be fun to use and give a nod to". He stated that when he wrote Conan the Barbarian, he had an "internal continuity [he's] keeping track of and making sure it doesn't contradict other stories as much as [he] can, but it's also built so anyone can get on board at almost any point.", as demonstrated by the background to the character Threen, a reference to "Savage Sword of Conan #178 from 1990, but readers don't need to know that to read and enjoy".