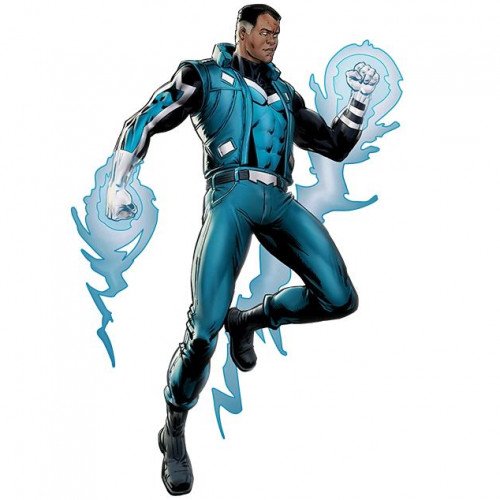 Dr. Adam Brashear gained incredible powers over antimatter after he was exposed to an unexpected explosion by an experimental antimatter reactor. Donning the superhero identity of the Blue Marvel, Adam became one of the most popular heroes of his time, but when his identity and race became public after a deadly fight, he was asked to step down and retire. Disillusioned, Adam went into seclusion and focused on academia, becoming a tenured professor and family man. When Adam's friend and arch-nemesis, the Anti-Man, returned, it brought Adam out of retirement. From his secret base, the Blue Marvel watches over Earth, unable to return to a normal life and is continuously drawn into a life of superheroics. Anti-Matter Energy Absorption: Theoretically, it seems to be the main source of Blue Marvel's power. This source of power is the energy released from anti-matter which derives from the inter-dimensional universe called the Negative Zone. Anti-matter is the same as normal matter except that the sub-atomic particles are the opposite charge. Adam Brashear is the first human anti-matter generator and reactor. The experiment he gained his powers from renders his form unaffected from anti-matter. 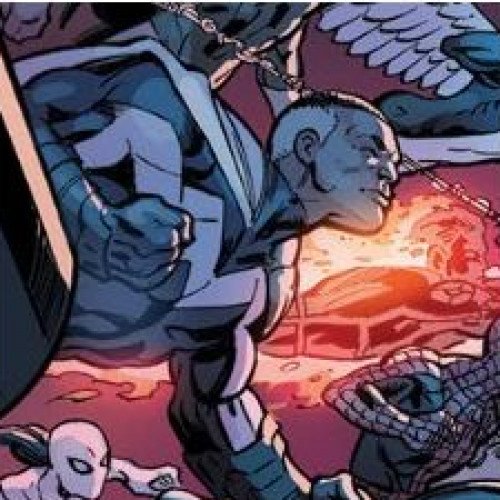 Blue Marvel seemingly had a similar history as his Earth-616 counterpart, except that he succumbed to an incursion. He would be reborn on God Emperor Doom's Battleworld in the section of the Kingdom of Manhattan similar to Earth-616. When the two domains merged forming Earth-61610,[1] Blue Marvel was one of the heroes who went out to deal with the two Hulks. [2] He assisted in the battle between his group from the 616-like group and the group from the universe similar to the ultimate universe.[3] The two groups learned the truth about their reality from Miles Morales and teamed up to confront Doom and were wiped from existence.