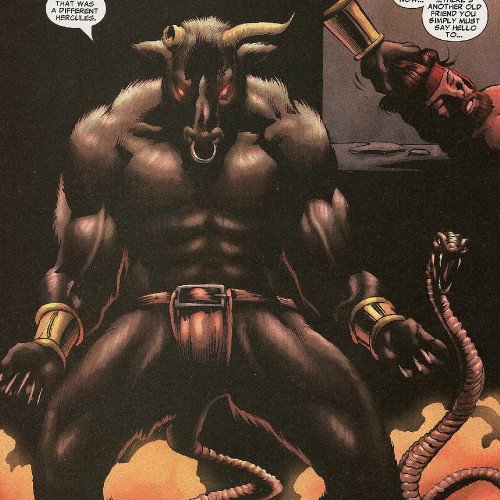 Achelous was an Olympian river god living in ancient Greece, and the son of the Titans Oceanus and Tethys.[1] His chosen form was of a giant bull. He fell in love with a mortal named Deianira. Deianira was also an interest of Hercules and so, Achelous challenged him for Deianira's hand in marriage. As the battle raged on, Achelous transformed into a bull and charged at Hercules. He avoided the attack and shattered Achelous' right horn. With a hatred towards Hercules, Achelous agreed to help Eurystheus, Hercules' cousin and bitter rival.[3] They returned from Hades to challenge Hercules again, but once more failed against their bitter foe.

The original Ani-Men had died fighting Iron Man under orders from Count Nefaria. Achille DiBacco was recruited by the Death-Stalker to become a member of the new Ani-Men, alongside with Roy McVey (the new Ape-Man) and Sebastian Patane (Cat-Man). Lacking any super-power, they were provided with super-powered suits. [1] The Death-Stalker intended to use the Ani-Men to fight Daredevil and his lover Black Widow. The Bird-Man was defeated by the Black Widow and sent to jail. This saved DiBacco's life because the Death-Stalker killed McVey and Patane for their failure.[2] DiBacco retained his Bird-Man identity and might have used it to commit additional crimes. He was contacted by Gary Gilbert, a former costumed criminal turned business agent for criminals. Gilbert was worried about the Scourge of the Underworld, a masked figure who was killing costumed criminals such as Gilbert and DiBacco. Gilbert organized a meeting in the Bar with No Name, Medina County, Ohio, to discuss potential counter-attacks. As the Scourge was known to use weapons instead of powers, weapons were to be left at the door. However, the Scourge infiltrated in the meeting disguised as the bartender and shot down all the seventeen criminals including Bird-Man, wielding a cut-down .50 submachine gun in each hand. Bird Man and the other criminals killed by Scourge were later resurrected by The Hood in order to kill the Punisher.