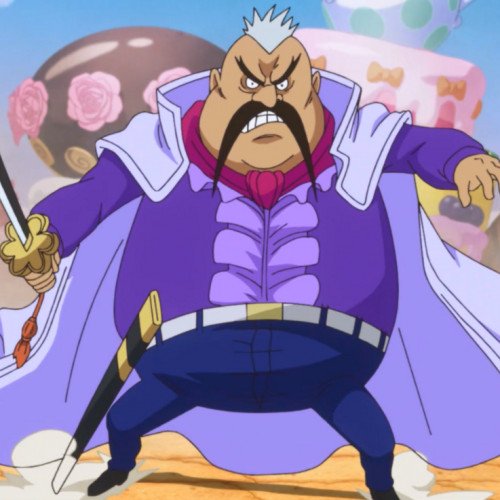 Charlotte Dosmarche[5] is the 14th son and 23rd child of the Charlotte Family and the younger triplet brother of Nusstorte and Basskarte.[4] He also is an officer of the Big Mom Pirates[3] and serves as Totto Land's Minister of Tea (お茶大臣 Ocha Daijin?), governing over Black Island. Dosmarche is a large portly man with olive skin and a round body with notably short limbs when compared to the rest of his body. His head is also quite pudgy and possesses a round nose, a long black handlebar mustache, and thick eyebrows. His hair has already become grey and styles it into a short messy mohawk. His attire is mostly purple in color, wearing a ruffled dark purple shirt, a light purple cape, and dark blue pants, along with a red ascot. He also carries a sword on the right side of his belt. Not much is known about Dosmarche's personality, but since he took part in Big Mom's plan to assassinate the Vinsmoke Family and helped his crew chase after and attack the Germa Kingdom, he can be considered very loyal to his family and crew.[1] He was frightened by the thought of Big Mom's reaction to the destruction of Mother Carmel's photo. 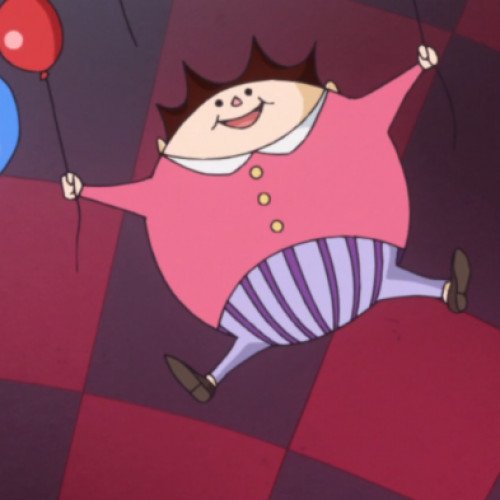 Charlotte Dolce and Charlotte Dragée are the 45th and 46th sons and the 83rd and 84th children of the Charlotte Family, being the two youngest sons of Charlotte Linlin, and are members of the Big Mom Pirates. Dolce and Dragée are young identical-looking boys who have a round body shape and wear formal pink shirts with striped pants. They are usually seen hanging on to balloons.[2] Dolce wears lavender pants with purple stripes, while Dragée wears light green pants with dark green stripes. Dolce and Dragée are very fond of balloons and often hang from them for fun. They detest to see their balloons pop, which is one of the reasons they hate their sister Anana, who they view as a psychopath due to her sinister love of knives and mutilation.