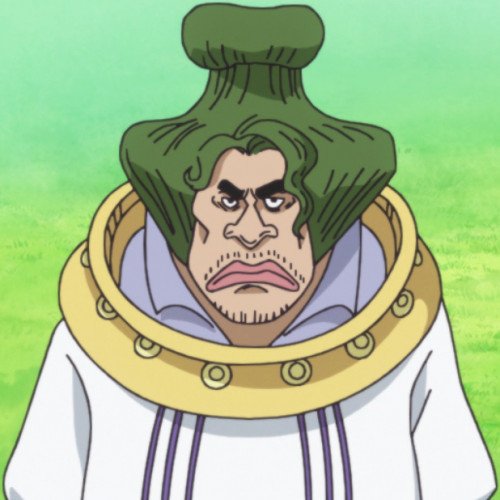 Saint Donquixote Mjosgard[3] is a World Noble who visited Fish-Man Island ten years before the start of the series. He is a member of the Donquixote Family. Mjosgard has his dark green hair styled in an updo, a hairstyle shared by most other World Nobles. He has a wide face with a bulbous nose that has snot hanging out from time to time, thick lips, and small slit-like eyes. Like all World Nobles, he wears a thick white protective suit adorned with medal-like knobs and an air bubble when out in public. When he arrived on Fish-Man Island, he was shown bloody and injured after his journey. In the present, his appearance remains mostly the same with only some minor changes. He appears slimmer and his hair appears more angular. His face has facial hair, and his eyes appears more blackish. He wears a simple, light purple collared shirt underneath his protective suit. 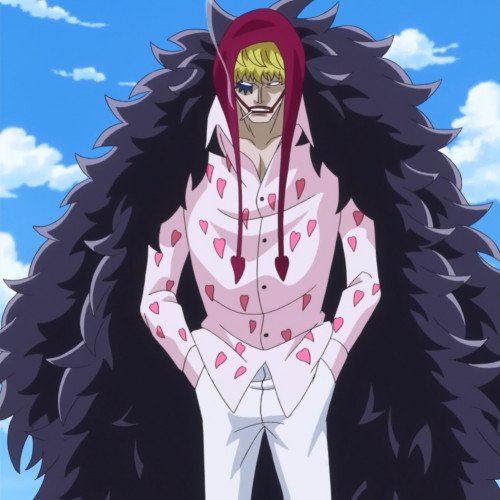 Donquixote Rosinante[9][1] was formerly a World Noble of the Donquixote Family descent,[4] as the second son of Donquixote Homing and the younger brother of Donquixote Doflamingo.[10][9] After his family lost their status as Celestial Dragons and became pariahs, Rosinante became an Elite Officer of the Donquixote Pirates, serving Doflamingo under the codename Corazon.[11][12][3] The truth, however, was that he was a Marine Commander, working undercover in order to stop Doflamingo.[1] He was found out by the former Corazon, Vergo,[13] and was executed by Doflamingo 13 years ago. Rosinante was a tall man (standing just below his brother at 293 cm) as a 10-year old Trafalgar Law was not able to reach his waist; in adulthood, he was a comparable height to his older brother Doflamingo (who stands 305 cm). He had golden-blonde hair, pale skin (tanner in the manga, much like his brother), and sharp, reddish-brown eyes. He was seen wearing a dark red hood from which two heart-like shapes hang from, a pair of beige jeans (white in the anime), a dark purple feather mantle much like his brother and a white shirt with pink hearts printed all over it. He also wears mismatched shoes. His hair was styled longer than his brother's, as it came close to his eyes. Rosinante had tattoos (or makeup) over his eyes and mouth.[15] He was also seen wearing sunglasses, though he did throw away with these upon his six-months journey with Law.