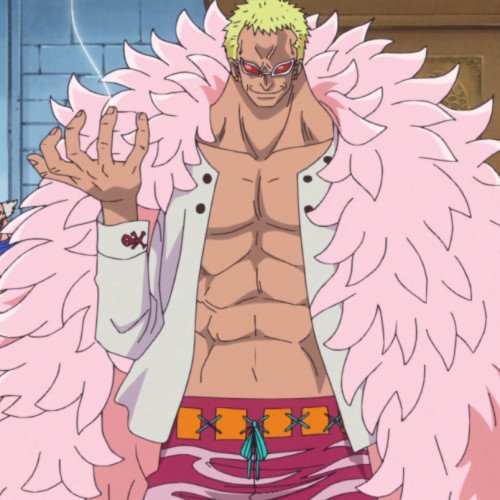 Donquixote Doflamingo,[4] nicknamed "Heavenly Yaksha",[8] is the captain of the Donquixote Pirates,[15] a former member of the Seven Warlords of the Sea with a frozen bounty of Beli.png340,000,000,[1] the most influential underworld broker under the codename "Joker",[7][2] and is a former World Noble of the Donquixote Family descent. He is the first son of the late Donquixote Homing[16] and the older brother of the late Rosinante,[17] both of whom he killed out of feeling betrayed by them.[18][17] Doflamingo became the king of Dressrosa after taking the throne from Riku Doldo III eight years before the start of the series.[19] He ruled the country tyrannically until he was stripped of his positions as a Warlord of the Sea and king after he was defeated by Monkey D. Luffy near the end of the Dressrosa Arc, being arrested alongside most of his crew members by Admiral Fujitora[20] and locked up at Impel Down Level 6. 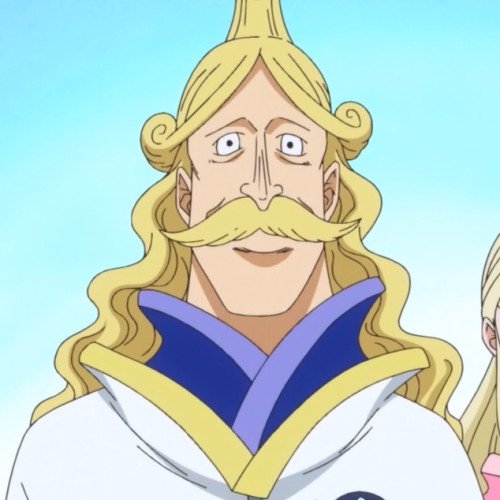 Saint Donquixote Homing was the father of Doflamingo and Rosinante. A former World Noble of the Donquixote Family, he withdrew from his position and left Mary Geoise in order to live a normal life with his family. After suffering two years of abuse from prejudiced civilians, Homing was killed by his then ten-year-old son, Doflamingo. Homing was a tall man, with dark blonde curly hair which reached to his shoulders, styled in the traditional way of the Celestial Dragons. He sported an impressive mustache, and, unlike his amoral brethren, possessed remarkably kind facial features and a rather thin face. He wore the typical garb of a World Noble during his tenure at Mary Geoise: a thick white suit with medal-like knobs on it, and a blue collar.[2] After renouncing his status, Homing lowered his hair from the World Noble style, and switched to ordinary fine clothes, consisting a simple cyan dress shirt, dark pants with a light green cravat. His garments became increasingly tattered and dirty whilst living on the run in the North Blue.