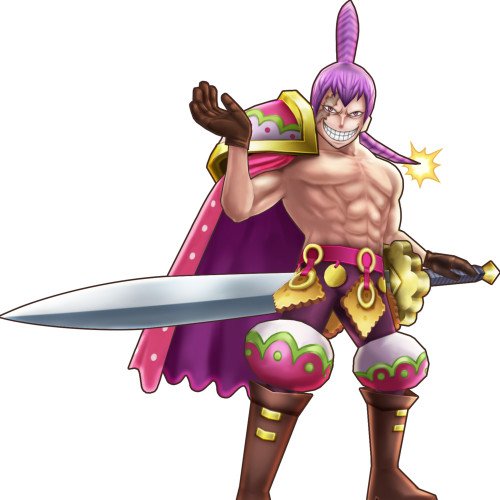 "Thousand Arms" Charlotte Cracker[4][9] is the tenth son and 15th child of the Charlotte Family and the oldest triplet brother of Custard and Angel.[10] He is also one of the Three Sweet Commanders of the Big Mom Pirates and serves as Totto Land's Minister of Biscuit (ビスケット大臣 Bisuketto Daijin?), governing Biscuits Island. Due to his actions and role, he is a major antagonist in the Whole Cake Island Arc. Cracker is a muscular man of notable height, at 307 cm.[6] He has mostly short, purple hair with a long, baguette-like bun tied at the back of his head and a pair of thin, pointed strands on either side that appear to spark like firecrackers. A very large scar covers his right eye and he has small wrinkles around both eyes. Cracker is shirtless and wears a kilt with decorative biscuits adorning it as well as shin length brown boots on his lower half. On his right shoulder, he wears a large brightly colored pauldron that has a pink polka dot cape attached to it. 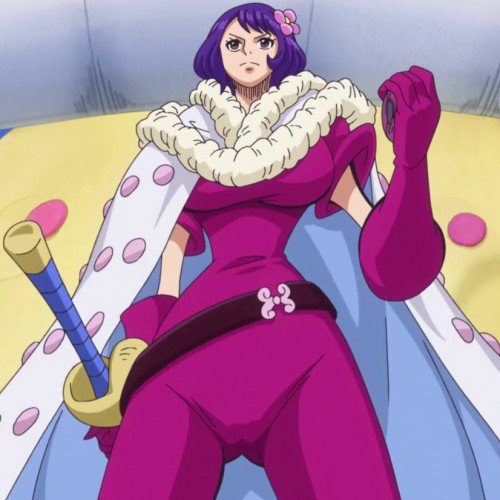 Charlotte Custard is the sixth daughter and 16th child of the Charlotte Family and the middle triplet sister of Cracker and Angel.[5] She is also an officer of the Big Mom Pirates. Despite her age, Custard is a slim, young-looking woman who has fair skin, brown eyes, short violet hair adorned with a flower. She wears a purple-pink bodysuit with matching elbow-length gloves and belt around her waist. She also wears a large, fluffy light pink cape with pink polka dots around her shoulders. Nothing is known about Custard's personality. However, since she took part in Big Mom's plan to assassinate the Vinsmoke Family and led a squad after the Fire Tank Pirates, she can be considered very loyal to her family and crew.