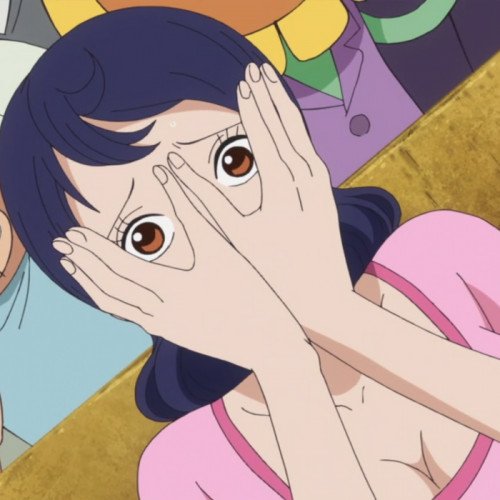 Aremo Ganmi is a spectator at the Corrida Colosseum. She lives in Primula, a town in the west of Dressrosa. She is a young woman with short, light colored (orange in the anime) hair. She wears a dark colored, floral patterned dress and a light colored rose in her hair. In both of her appearances so far, she has always had her hands covering most of her face except for her eyes. She was first seen as a spectator watching the B block battle royale. While witnessing the brutality of a little fighting fish against the competitors who fell into the water, she covered her face with both hands, but left gaps between her ring and little fingers to see through. 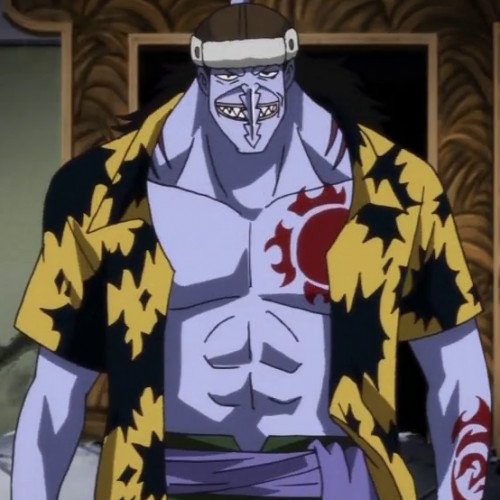 Arlong the Saw is a sawshark fish-man. He was the captain of the all fish-man crew, the Arlong Pirates,[1] a former member of the Sun Pirates,[2] and the older half-brother of Madam Shyarly.[8] He had the highest bounty in the East Blue before being defeated by Monkey D. Luffy.[7] Due to his actions and role, he is the primary antagonist of the Arlong Park Arc. Arlong is a large, muscular, light blue saw-shark fish-man whose most distinctive trait is his saw-shaped nose. He has long, black hair with a widow's peak reaching down to his shoulders, under a brown ushanka. He has a fin on his nape, surrounded by his hair, and the gills are located on both the sides of his neck. His Sun Pirates tattoo is on the left side of his chest, while his own Jolly Roger is on his left forearm. Other notable features include thin, fierce light-blue eyes and a long, angular jaw.