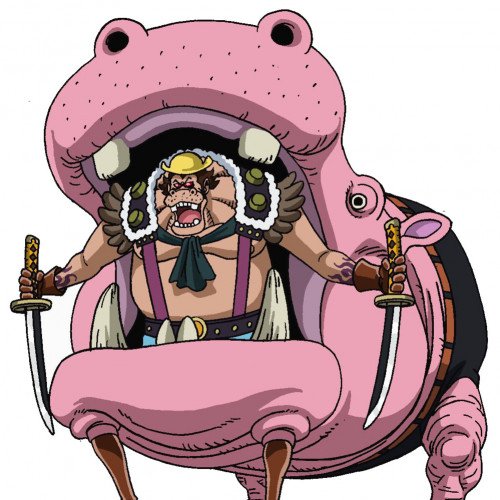 Dobon is a Shinuchi of the Beasts Pirates who serves as a vice warden of the Prisoner Mine in the Udon region of Wano Country. Dobon is a very large man with short, dark spiky brown hair and a hippopotamus' muzzle. He wears a pale yellow bowler hat, a pair of red shades and a pair of very large light blue trousers held up by two violet suspenders, and does not wear a shirt. He also wears a frilly garment on his shoulders with hippo's feet designed on them and brown gloves, brown boots, and also has flame-shaped tattoos on his arms near the wrists. Because he ate a hippo SMILE, Dobon's legs have become infused with the bottom lip of an extremely large pink hippo, causing him to effectively sit inside the hippo's mouth. The hippo only has a pair of hind legs as Dobon's legs are the forelegs, and it wears dark pants with a belt around its hindquarters. Dobon is very gluttonous and selfish, getting angry at Monkey D. Luffy and Eustass Kid for depleting the Prisoner Mines' kibi dango rations even though they worked to earn it, and he was willing to abuse his authority as deputy warden to withhold their earnings from them. He is also very flippantly callous towards prisoners, as shown when he stepped on Hyo. 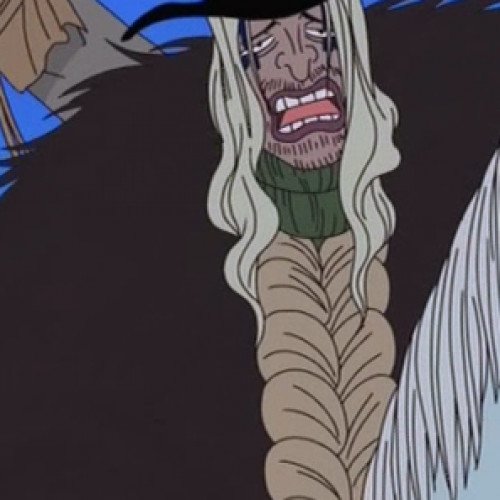 Doc Q, like the rest of his crewmates, is a very large man and is always seen traveling on the back of his horse Stronger, who is, similarly, an unusually large horse. His nose is slightly longer than normal, his face appears always unshaven, and there are straight purple tattoos coming from his hairline to the corners of his eyes. He has long and ash blonde hair, and constantly has a pallid look about him acting as though he is on the verge of death. He is seen wearing a black fur coat, a wide-brimmed, black beaten hat, and what appears to be a dark white hangman's noose around his neck. He would appear to wear a green turtleneck, and from under his coat sprouts what looks to be a brown robe, under which his hairy legs are visible. He has black, large-buckled shoes. On his back he carries a long, cylindrical bag, in which he keeps his scythe. His overall appearance resembles that of a stereotypical undertaker from Western fictions. Also, his pale skin, rather thin body, dark clothing, and use of a scythe is very similar to the typical Western image of a Grim Reaper; befitting of his epithet.