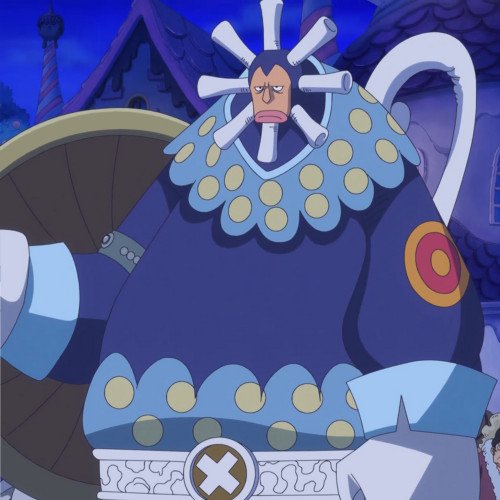 Charlotte Chiboust[4] is the 30th son and 51st child of the Charlotte Family[3] and an officer of the Big Mom Pirates.[2] He also serves as Totto Land's Minister of Mix (ミックス大臣 Mikkusu Daijin?), governing over Sanshoku Island.[3] He was a member of Charlotte Oven's army to ambush Luffy on Cacao Island. Chiboust is a tall and rotund man with comparatively short legs. He wears a blue suit over almost his entire body, leaving only his arms and face exposed. Around his head, he has cylindrical fixtures that resemble sun rays. He wears polka-dotted sashes around his shoulders and waist, and has a handle-shaped appendage on his back that resembles one for a teapot or cup. Chiboust is loyal to his family and crew, as he helped them ambush Monkey D. Luffy on Cacao Island.[1] He seems to have no problem with violence, as he tried to help rip out his crewmate Pekoms' eyes when Pekoms tried using his Sulong form against them. 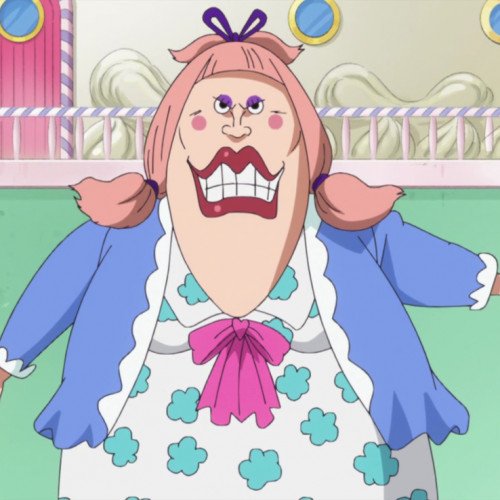 Charlotte Chiffon is the 22nd daughter and the 52nd child of the Charlotte Family and Totto Land's former Minister of Puff (ふんわり大臣 Funwari Daijin?, Viz: "Minister of Fluff").[3] She is Capone Bege's wife and the mother of Capone Pez, as well as a member of Bege's Fire Tank Pirates.[8] Her father is Big Mom's 25th ex-husband, Pound,[9] and her younger twin sister is Lola. Due to her resemblance to Lola, Chiffon was abused by Big Mom in her rage for Lola abandoning an arranged marriage. This led to Chiffon abandoning her ties to her blood family and helping Bege in his attempt to assassinate Big Mom, which caused Big Mom and most of Chiffon's siblings to identify her as an enemy.[4] She is an ally of the Straw Hat Pirates during the Whole Cake Island Arc. She is also one of the central characters in "Gang" Bege's Oh My Family Cover Page Serial.