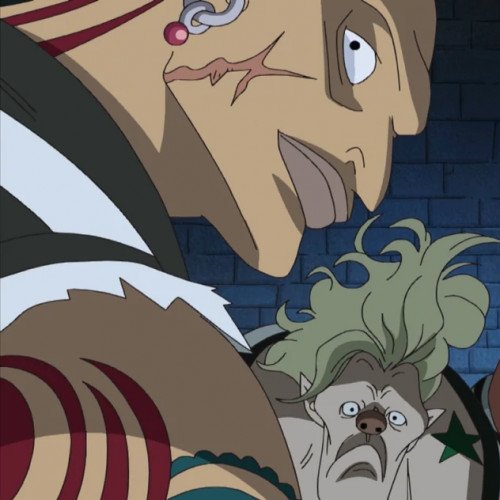 Ibadonbo is a tan-skinned, muscular man with a pointed nose, slightly-protruding brow, sharp jaw, and upward-pointed ears. He has circles under his eyes, a large scar on his right cheek, a fish-shaped tattoo on his forehead above his right eye, and his right arm is covered in tattoos. He wears golden earrings and a prison uniform. Little is known about Ibadonbo's personality, but he seemed curious when Magellan and Hannyabal brought Boa Hancock to Level 6 to visit Portgas D. Ace.[1] He was later puzzled when Blackbeard came to Level 6 and offered freedom to the inmates. As a Level 6 prisoner, Ibadonbo is quite dangerous.[1] However, his abilities and reason for his imprisonment are unknown. At some point in his life, Ibadonbo was sentenced as a criminal and imprisoned on Level 6 of Impel Down. 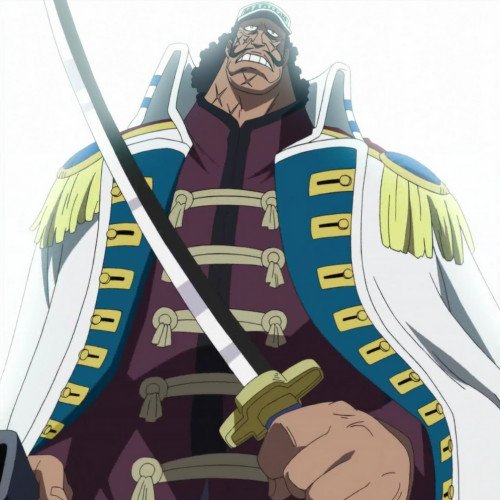 Doberman has four X-shaped scars on his face and two on his neck, a split, curling mustache and brown flowing hair, reaching down to his shoulders. He has no pupil in his left eye. His Marine coat, draped on his shoulders like a cape, is more elaborate than the ones worn by other high-ranking officers, and the stripes across his cap are in a zig-zag pattern. Underneath his coat he sports an outfit reminiscent of those worn by naval officers in the 1600's, composed of a loose shirt with rope-like ornaments on it and suit pants. From Doberman's first introduction, he wore a red marine coat until the Whitebeard War, after that it was white. When Doberman first joined the marines, his jaw was less angular and his hair was shorter. He also still had both pupils, and only had a single X-shaped scar, under his left eye.