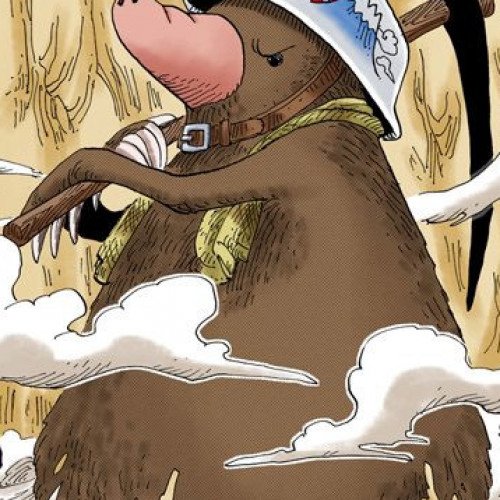 He is a large and dark colored mole with a light colored duck-like snout. He carries a large pickaxe fit for his size and wears a miner's helmet. At first, Dirt Boss seems arrogant as he challenged Gedatsu to a fight. After his defeat to Gedatsu, he helps out as he digs a tunnel from Arabasta to the hot springs. He is a very good digger, as he dug a tunnel connecting Goro's thermal island to Arabasta. While Goro and Gedatsu were digging around for the hot springs, Gedatsu stumbled upon the Dirt Boss.[3] He attempted to attack Gedatsu, but was easily defeated and so became a subordinate of the former sky priest.[4][5] He then kept digging and succeeded in helping Goro and Gedatsu in find water underground.[6] Afterwards, he kept digging until he suddenly landed in Arabasta, and with that he created a tunnel that would connect the two islands. In the anime, Tonjit's grandson appears riding a mole strongly resembling the Dirt Boss, but no connection between the two is mentioned. In the game Unlimited Cruise, the player can catch moles that look like small versions of the Dirt Boss. 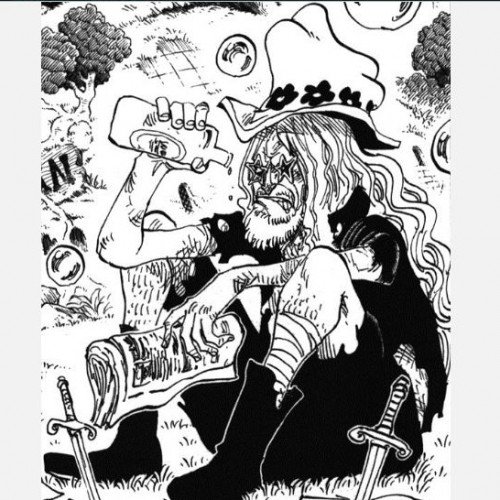 Before the timeskip, Disco was a thin, eccentric man who had long silver hair, a cleft chin, stubble beard and mustache. He wore a purple coat, pink scarf, a tall yellow hat with flower patterns around the bottom, and his trademark star-shaped glasses.[1] After the timeskip, Disco has lost his business and has become ragged-looking, with torn clothes and a scruffy beard and hairstyle. He now wears torn black boots and a ripped shirt and shorts. However, he still maintains his hat and glasses, the former which crumpled inward. He is a sadistic person, who abused and kicked Camie when she was first brought to him.[1] He is extremly easy to anger, as he fell into a fit of absolute rage from a harmless gesture like Camie sticking her tongue out at him. After the fall of the human shop, he seems to have fallen to ruin and become unable to move on, resorting to alcohol. He also seems to have developed a grudge towards the Worst Generation who were present at the day of the Human Shop's end, as he stabbed the wanted posters of Luffy, Kid, Law, and Rayleigh with knives. Donquixote Doflamingo Doflamingo left Disco in charge of the Human Auctioning House. After Luffy punched a Celestial Dragon, Disco contacted Doflamingo to beg him to resolve the problem. However, Doflamingo lost interest in the slave-trade and told him to never call him again due to the age of SMILEs and he would attend the war against the Whitebeard Pirates leaving Disco in shock. Because of all the trouble Luffy caused after punching a Celestial Dragon, Disco holds a grudge on him for ruining his business and losing his job and dignity. Eustass Kid Because Kid was part of the incident that Luffy caused, Disco despises him and stabs his wanted poster. Trafalgar D. Water Law Disco also holds a grudge against Law for the incident where Luffy punched a World Noble. Disco expresses his hatred for him by stabbing his wanted poster. Silvers Rayleigh Disco hates Rayleigh for pretending to be a slave to steal money, causing the customers to cancel their orders and demand refunds. Two years later, he expresses his grudge by stabbing his wanted poster.