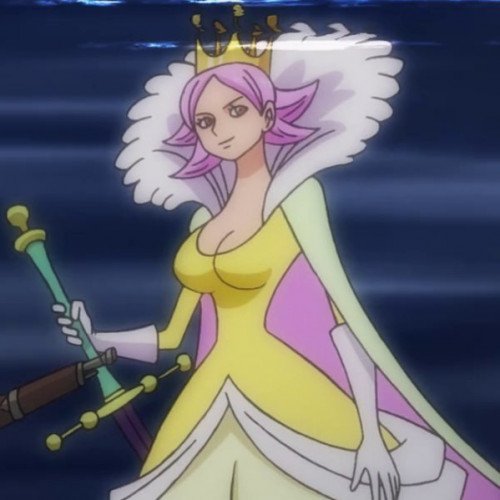 Charlotte Broyé is the ninth daughter and 20th child of the Charlotte Family[4] and the younger twin sister of Brûlée.[5] She is also an officer of the Big Mom Pirates[3] and serves as Totto Land's Minister of Meringue (メレンゲ大臣 Merenge Daijin?), governing over Milenge Island. Broyé is a young-looking woman with light brown eyes; a small, slender nose; a thin waist; and short, light pink hair divided into four locks. She wears a long dress with a tall, fluffy, white collar; a floor-length, pale green cape with a pink underside; a pair of white, elbow-length gloves, and a golden crown on her head. The upper part of Broyé's dress is yellow and has a low-cut opening, revealing part of her breasts. Around her hips is a white peplum that curves downwards. The lower part of her dress is a pale beige, and is lined with three rows of roses. At her side is a long-handled sword with a black sheath. Not much is known about Broyé's personality. However, since she took part in Big Mom's plan to assassinate the Vinsmoke Family, she can be considered very loyal to her family and crew. She was frightened by the thought of Big Mom's reaction to the destruction of Mother Carmel's photo. 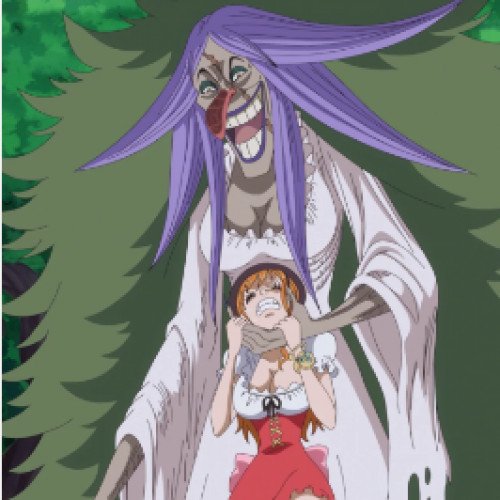 Charlotte Brûlée is the eighth daughter and 19th child of the Charlotte Family and the older twin sister of Broyé.[2][5] She is also an officer of the Big Mom Pirates.[3] She was stationed in the Seducing Woods to ambush the Sanji Retrieval Team, but after being defeated, the team used her Devil Fruit ability to enter an alternate dimension known as Mirro-World to move around Totto Land. Due to her actions and role, she is a major antagonist in the Whole Cake Island Arc. Brûlée looks in many respects like the stereotypical witch. She is an extremely tall, slightly hunched, and gray-skinned woman with a well-endowed yet thin figure, which makes her limbs appear to be exceptionally long. She stands at roughly twice Nami's height (170 cm), with her legs alone being noticeably longer than said woman is overall. She also has very long, gnarled fingers with overlong, sharp nails painted blue. The woman's face has very striking, hag-like features. Her droopy eyes have yellow irises and long lashes, and are topped by viridian eye shadow and black, high-arched eyebrows, which she keeps perpetually furrowed. She has a huge and over-projected, reddish hook nose (similar to her mother's), a large mouth with purple lipstick that is usually seen devilishly smiling, a square jaw, and a brown, sharp-cornered scar stretching diagonally down her face from right to left. Brûlée's hair is lavender and divided into two side locks that cascade over her breasts, as well as four other, similarly long, and sharp, lock-like segments that stick to the sides, slightly curved upward.