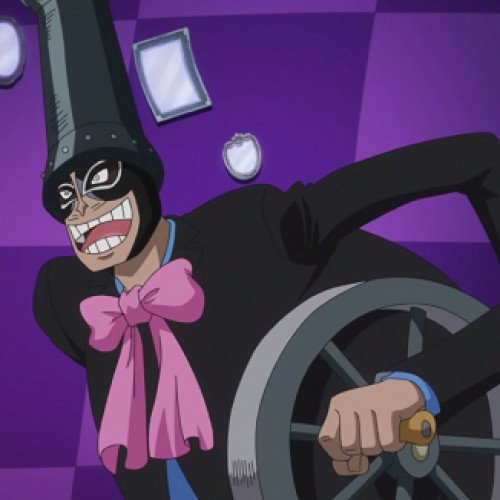 Diesel is a tall man with rather thin legs and a tiny mustache. His most prominent feature is his giant hat resembling a chimney which blows smoke, as well as wheels on both sides of his body which appear to have no real functionality other than him spinning them with his arms when he runs. As a Longarm, he has unusually long arms, with an extra elbow joint on each. He wears a dark suit with a giant pink bowtie, dark pants, and a dark mask over his eyes.[1][2] When he was taken to the Fire Tank Pirates' hideout, he was forced to change his clothes into a lighter suit. Diesel is very loyal to Big Mom, as he massacred several people to get mythical flour for her,[1] and immediately went to report Brûlée's defeat to her. He is very confident in his running ability to the point of bragging about it. Like many other characters, Diesel has a unique laughing style, following the sound of a steam train: "Shuppoppoppo". 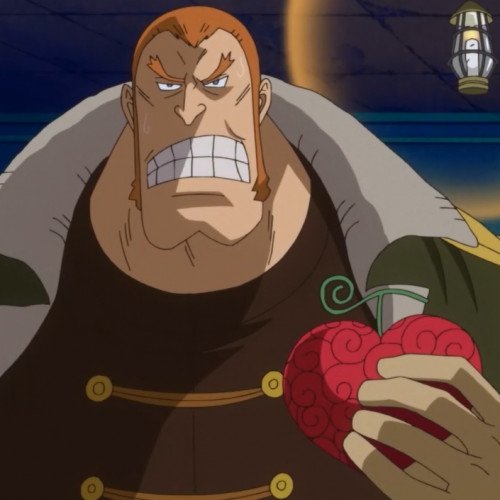 Diez Barrels was a Marine officer who defected to become a pirate. Thirteen years ago, while operating in the North Blue, he was killed by Donquixote Doflamingo during an attempt to sell the Ope Ope no Mi to the Marines.[1] He was also the father of X Drake. Barrels is a large, fair-skinned man with a prominent chin, pointed nose, and small ears. He has short orange hair, much like his son, that is slicked back, a predominant widow's peak, and sideburns. He wears a dark-colored buttoned shirt and a light colored pirate-style coat. Barrels is quite naïve, setting up a deal to sell the Ope Ope no Mi to the Marines. He does, however, realize the fruit's potential, despite not wanting it for himself, though he did not know of the ability to grant immortality; Doflamingo regarded him as a fool for not knowing the true value of the fruit's powers.[1] His greed for monetary value made him focus more on retrieving the fruit when it was stolen by Donquixote Rosinante than tending to his own injuries.