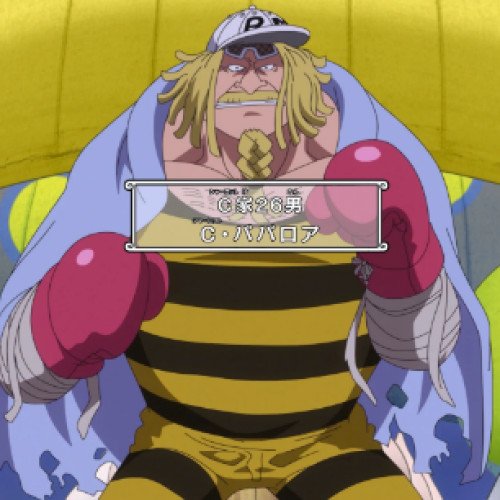 Charlotte Bavarois is the 26th son and 45th child of the Charlotte Family,[2] as well as an officer of the Big Mom Pirates.[3] He is the younger twin brother of Snack. Bavarois is an extremely tall man with a thick physique. He has blonde hair in strands that resemble dreadlocks, thick mustache, and a braided beard that goes to his upper chest. He wears a yellow and black horizontally-striped jumpsuit, dark shoes, and a blueish-purple cape that seems to be in tatters at the end. He also wears white bandages over his arms, dark red boxing gloves on his hands, a cap that has dark blue letters "BM" on the front, and a pair of shades made from the netting of the cap on his forehead. Bavarois is loyal to his family and crew, as he led a fleet to attack the Straw Hat Pirates, being intent on taking them down. He can raise his temper when problems arise, as shown when the cannonball homies were having difficulty aiming for the Straw Hats. 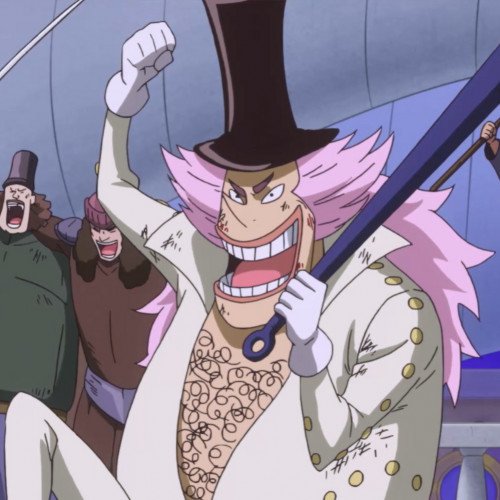 Charlotte Brownie[1] is the 32nd son and 58th child of the Charlotte Family[1] and an officer of the Big Mom Pirates.[2] He joined Charlotte Oven's army to intercept the Straw Hat Pirates on Cacao Island. Brownie's a man with jaw area is very rotund and large in comparison to the top of his head. He has a pointy nose and light purple hair that sticks up on the sides. He also has a very hairy chest too. He wears a studded suit with a very high collar as well as a tall and thin top hat. Brownie appears to be rude, lazy, and easily bored, as he blew off standing guard on Cacao Island after seeing the excessive amounts of forces stationed there and decided to go to sleep instead, only wanting to be woken up if anything happened.