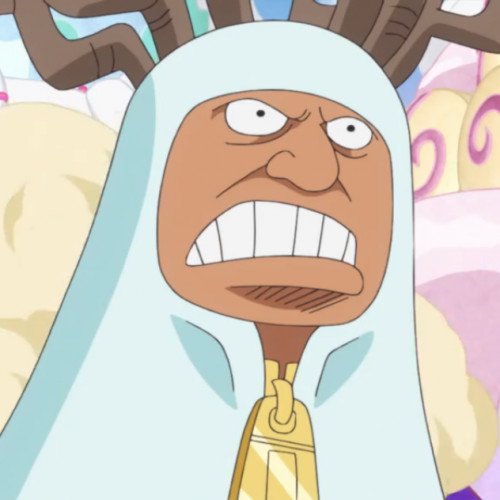 Charlotte Basans is the 23rd son and 39th child of the Charlotte Family and the younger twin brother of Saint-Marc.[3] He also is an officer of the Big Mom Pirates. Basans is a very tall dark-skinned man with several antlers on his head. He wears what appears to be a puffy light blue hooded jacket with circle patterns that has a big zipper. He also wears armor on his legs. Basans is very loyal to his family and crew, as he went along with their plan to assassinate the Vinsmoke Family and expressed concern when it was not going as planned. As an officer of the Big Mom Pirates, Basans has authority over lower-ranking members of his crew.[4] Basans possesses a strong will, being able to withstand a burst of Big Mom's Haoshoku Haki and remain conscious from her loud scream. 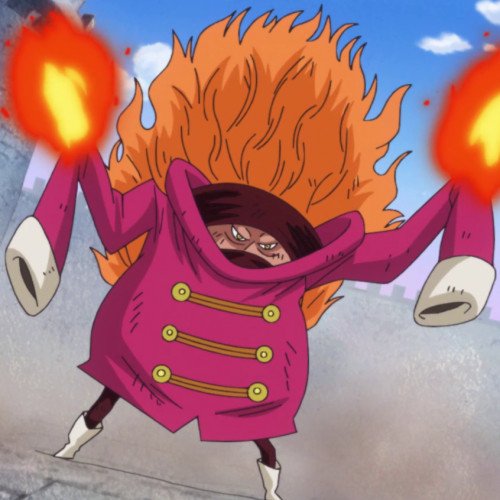 Charlotte Basskarte is the 13th son and 22nd child of the Charlotte Family and the middle triplet brother of Nusstorte and Dosmarche.[6] He is also an officer of the Big Mom Pirates. Basskarte is a large and wide man, with his head also being wide. The bottom part of his face is obscured by the collar of his jacket, which covers his entire body. He keeps his hands inside his long sleeves. He also wears a mask over his mouth and nose and a headband that obscures his face further. He has a massive mane of puffy hair that resembles flames.[7] While the manga has yet to show Basskarte's face, the anime shows that his mouth has fangs. Basskarte is very loyal to his family and crew, as he readily took part in Big Mom's plan to assassinate the Vinsmoke Family[7] and helped his crew chase after and attack the Straw Hats and Germa Kingdom.[9][10] He even accompanied his mother to Kaido's territory at Wano Country for revenge against the Straw Hats.