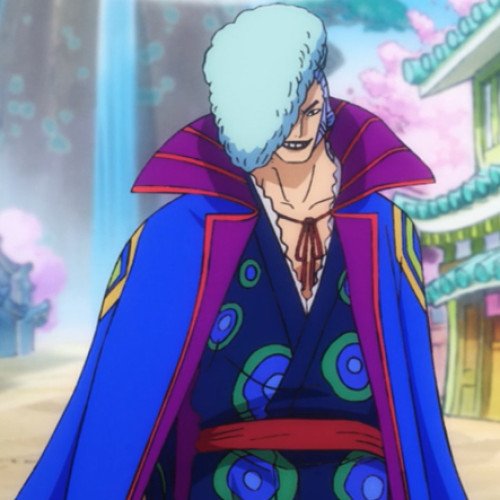 Denjiro is a samurai from Wano Country and one of the Nine Red Scabbards who served as Kozuki Oden's retainers.[5] After becoming grief-stricken over Oden's execution 20 years ago, Denjiro's appearance changed and he started going under the name Kyoshiro. With this new identity, he became a yakuza boss and recruited followers to form the Kyoshiro Family. Eventually, he started working for Oden's usurper, shogun Kurozumi Orochi, as his money changer and bodyguard; he would successfully keep his true allegiance to the Kozuki Family a secret and bide his time until the day would come of the Scabbards reuniting for the final battle to take down Orochi and Kaido.[2][1][6] Apart from his Kyoshiro identity, Denjiro would disguise himself at night to rob the rich Flower Capital citizens and give to the poor living outside, earning him the moniker "Ushimitsu Kozo". He also took care of Oden's daughter Kozuki Hiyori for the past 13 years, raising her to become the oiran Komurasaki. 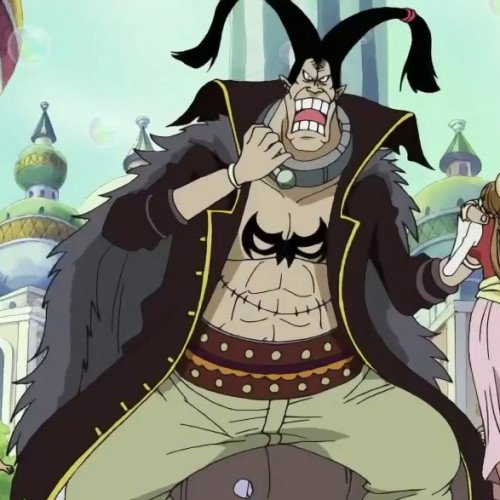 Devil Dias[3] is a pirate and the former captain of the Acumate Pirates, but was captured and sold as a slave to the family of World Noble Saint Rosward. Dias is a large and muscular man who is large enough to carry a normal-sized woman in one hand. His long black hair stands high, and is arranged into two split ends. He has a devil-looking pair of eyes tattooed on his torso, and a stitched scar right on his stomach. He wore a brown captain's jacket with a gray furred cape, light pants with a double brown belt to hold it up, boots, and a bomb collar. Like all slaves of the World Nobles, he has the Hoof of the Soaring Dragon burned onto his back to forever mark him as "less than human". He was a prominent enough to be given a bounty of Beli.png60,000,000, though Sentomaru noted it was no where near enough to get him through the New World. He was resilient enough to survive the explosion of the bomb collar around his neck, though he was gravely injured.