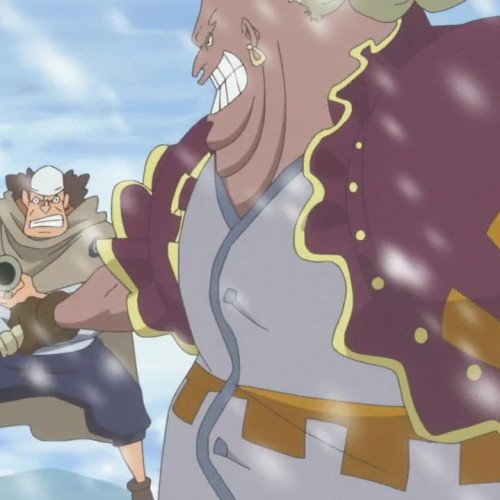 "Rope-Tugging" Chappe is an ex-prisoner who was a henchman for Caesar Clown. He was first seen fighting against the Marines of G-5 on Punk Hazard. Chappe has a mostly bald head with a small ponytail at the back. He has a crooked nose and double chin. He wears a coat with frills and a striped shirt buttoned all the way up. He was shown to be a bull centaur. Chappe was very loyal to Caesar Clown, since he calls him "Master".[1] However, when Caesar betrayed his subordinates, he felt wronged and fled the facility with the Straw Hat Pirates and G-5 Marines. He was also scared of Smiley and did not know what it was. He has considerable strength, as he and the rest of his group were able to fight against the G-5 Marines and gain the upper hand. He wields a rope whip in combat, and is seen being very proficient in using it. 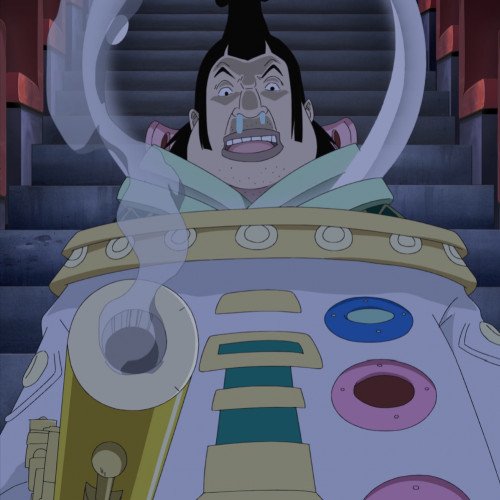 Saint Charlos[4] is a World Noble, the son of Saint Rosward, and the older brother of Saint Shalria.[1] Due to his actions, he can be considered the main antagonist in the Sabaody Archipelago Arc, and a minor antagonist during the Levely Arc. wide, obese face and what appears to be stubble around his thick-lipped mouth. He always has snot hanging from one of his nostrils, which he regularly picks at. As a Celestial Dragon, he wears the typical full-body, thick white suit of obese frame that resembles a spacesuit with medals or buttons on it, with a green collar, and a resin bubble that grants him a supply of oxygen separate from the ones commoners breathe. Charlos is more of a spoiled brat in comparison to his sister and lacks a sense of responsibility. His personality can be compared to Helmeppo's when Luffy first met him, although seemingly worse. While he shares the same disregard for commoners as his father and sister, he is more prone to acting immature or violent than they are.[5] He also has a habit of picking his nose all the time. While his family shows commoners where their place is whenever they pass by, Charlos purposely goes out of his way to make it clear. He made his slave suffer like his sister did, but his sister simply shot her slave whereas he pushed his slave to the limits until he collapsed, and then sold him off to ensure the man's continued suffering. He also seems to have a very strong need for confirmation from his father, as he constantly wants him to see and acknowledge his actions.