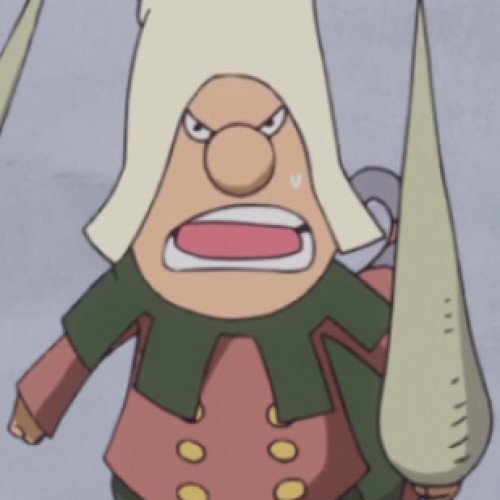 Daikon is an average-sized dwarf with light-colored skin and a large tear-shaped nose. He wears a hood with pointed ears on it that curve back.Little is known about Daikon's personality, but he is usually seen with a mischievous smile on his face. He is quite brave, having sacrificed himself to allow his comrades to continue Operation SOP.Daikon seems fairly strong, being able to topple Lao G with the assistance of Nubon and Baxcon. He was not, however, strong enough to subdue the pirate.He was first seen participating in the SOP operation. He was one of the dwarves who carried Robin through the narrow tunnel to the underground trade port, along with Inhel, Cotton, and Baxcon.[1] In the anime, Daikon was the dwarf Robin thanked for carrying her, and not launching her into the wall like Usopp's dwarves.After exiting the tunnel, the dwarves then split into two groups. One group remained with Usopp and Robin while the other group, including Daikon, went with Thunder Soldier to go to the royal palace to assassinate Doflamingo.The group with Thunder Soldier boarded a lift to the royal palace and were later confronted by Lao G. Thunder Soldier and the dwarves fought him, but they seemed to be outmatched. 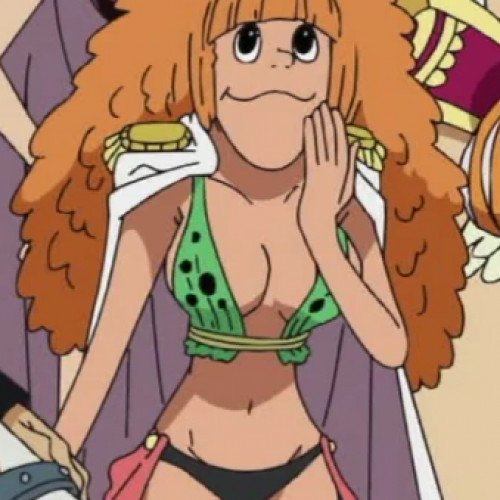 Daisy is a slim, well-endowed woman of average height. She has long, bushy orange hair. She wears an outfit typical to the rest of the Kuja Tribe; this consists of a skimpy green top which appears to be made only from a long piece of cloth which barely covers each breast and tied down with a thin belt, black thigh-high stockings, and matching panties with red cloths buttoned at each side. As a Kuja Pirate, she also wears a white cape that resembles a Marine coat. She is easily distinguished by her wide, perpetual grin.In the opening "Share the World", her top is yellow and she does not wear her stockings.She has a "zahahaha" laugh and often laughs after every sentence, as it was her and Ran who were at the front of the ship when the islanders greeted the pirates with "Ran-sama! Daisy-sama!" She is often seen with a smile and her mouth wide open.As a member of the Kuja Pirates, it can be implied that she is very strong as only the strongest warriors are allowed on the Kuja ship. Like all members of the Kuja Tribe, Daisy can utilize Haki. Daisy was on the Kuja Ship in the Calm Belt near Amazon Lily when Vice Admiral Momonga was requesting a meeting with Boa Hancock. Daisy commented on how she had not met a living man in a long time since pirates and merchants flee at the sight of the Kuja ship. After Hancock turned Momonga's crew into stone, the Kuja Pirates returned to Amazon Lily.