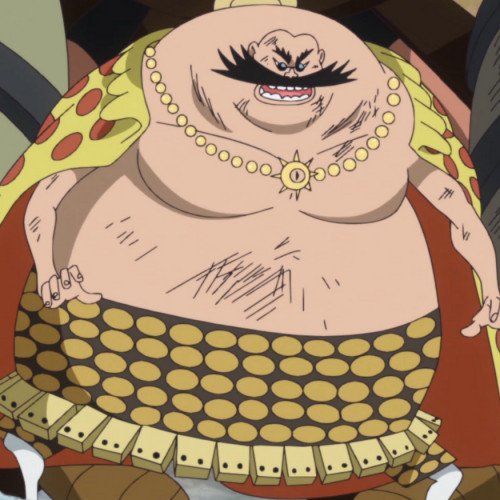 Dagama is a large chubby man, with a hunchback, and black shaggy eyebrows and a thick shaggy mustache.[1] He sports round black sunglasses and has a yellow coat with red polka dots draped over his shoulders. He wears a yellow beaded necklace with a yellow sun, and brown pants with tan spots.[1] When he was turned into a toy, he had the appearance of a pig.Ever since he appeared, Dagama has been shown plotting with and bribing the other competitors in his block to gain the upper hand. When the Funk Brothers called him out on this, he told them to stop acting like they weren't plotting something also.[1] When the B Block battle royale started, he commanded his collaborators to gang up on Bellamy. He then stated that "all that matters is the last man standing... the ends justify the means" showing that Dagama will do whatever it takes to win.[5] Later he was shown betraying his collaborators and even attempted to attack Blue Gilly while his back was turned, showing that he has no honor. It was stated by Blue Gilly that Dagama is a very shady and untrustworthy person.[6] However, he redeemed himself when he rallied the colloseum top fighters to fight as one and even held back Dellinger so that Cavendish, Luffy, and Kyros can safely pass the Donquixote Pirate officers.[7] He is also extremely greedy as he was willing to betray the the people that saved him in order to get the prize money, though a scolding from his king managed to change his mind to be more grateful. Like many other characters, Dagama has a distinctive laugh, "Gamahahahahah!" which sounds similar to his own name. 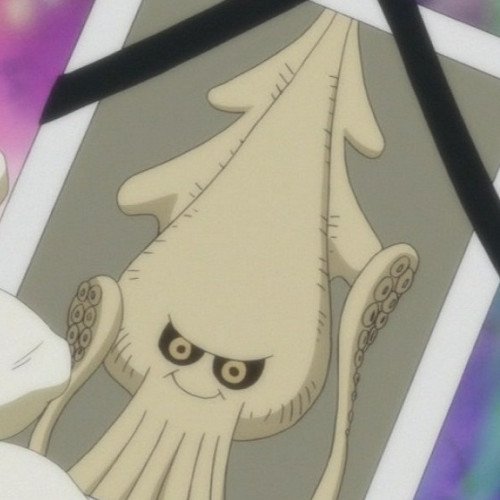 He was a small pale yellow squid, with fin-like appendages on the top of his head. He had six tentacles, unlike the regular squid that has ten. His tentacles were brown on the underside, with suction cups underneath them. He had a tiny mouth, and black and yellow colored eyes.Daidalos was extremely close with Ikaros Much, who was his best friend.[1] He is also somewhat curious, as he went towards the sun. It is unknown whether Daidalos had the same opinion of humans that Ikaros Much did.Daidalos' story comes from the myth of Daedalus and Icarus: a father and son who tried to fly with wings made of feathers and wax. Daedalus warned Icarus not to fly too high, because the heat of the sun would melt the wax. Icarus, forgetting himself, began to soar upwards towards the sun. The blazing sun softened the wax which held the feathers together and they came off. Icarus fell into the sea and drowned. Ironically, here Daidalos is the one that died, which is the opposite of the myth.