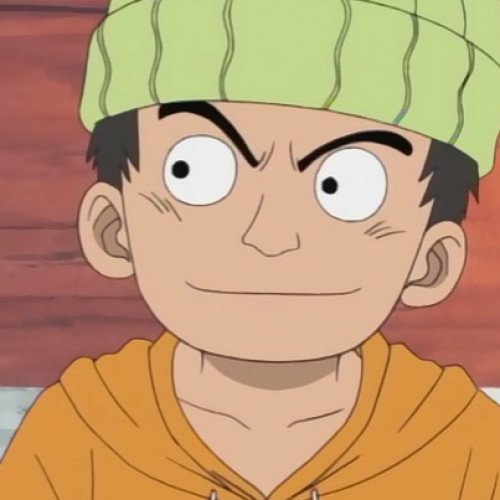 He is a small boy, with brown hair, and round eyes. He wears a green beanie, and an orange jacket. After the timeskip he has grown much taller, and has grown his hair longer. He has a new hat with the kanji "今" (Ima) meaning "now", and a plaid shirt. He wears an apron that says "Bell Mère's" on it and has the symbol from Nami's tattoo and the Japanese word for tangerine "mikan" (みかん) underneath it. He wears light colored gloves and has a bandage on his left arm. He also wears cargo pants. After Arlong killed his father, Chabo wanted to kill the fish-man himself in order to avenge his father's death.[1] After Chabo mistook Usopp for Arlong, Nojiko made Chabo realize that throwing his life away for revenge was not worth it as there were still people who cared for him in this world.[4] While he seemed aggressive for wanting to take revenge, in reality, he was very upset by his father's sudden death and was unable to process it in a healthy way until Nojiko spoke to him. After the timeskip, Chabo seems happier, now working for Nojiko. 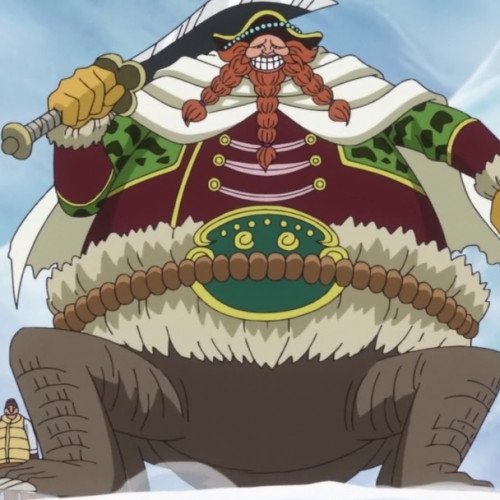 Chadros Higelyges,[7] better known as Brownbeard, is a former New World pirate. After Whitebeard's death he went off and took control of Foodvalten, one of the New World islands formerly under Whitebeard's protection.[2] After his defeat at the hands of Basil Hawkins, he quit being a pirate and resided on Punk Hazard,[5] where he became the boss of the Centaur Patrol Unit which guarded part of the island,[4] until his "Master" Caesar Clown betrayed him. Brownbeard is a very large, overweight man who appears to be roughly three times the height and four times the width of a normal human. He possesses a long brown beard, with three distinctly kept braids, as well as a mustache. He wears a large coat, over an open shirt, that seems to only reach to his shoulders. He leaves his chest bare, with something that appears to be a large wrestling belt with his jolly roger on it. His hair appears to come out of the top of his tricorne and is braided back.