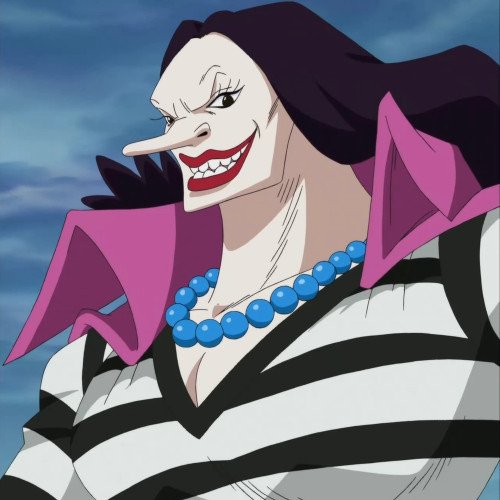 Devon is an extremely tall, pale-skinned, and well-endowed woman (shown to stand a similar height to her captain, who is 344 cm) with her hair in a set of girlish pigtails. Her face has wrinkles, a sloping forehead, a long witch-like nose, a devilish grin, and a square jaw. Before the timeskip, she wore a striped Impel Down uniform with a V-neckline. She also wore a large magenta cape, a blue pearl necklace, and a purple sash around her waist over lavender cargo-pants and black shoes.[1] After the timeskip, Devon now sports a new outfit that makes her resemble more a classical pirate.[7] She wears a bicorn hat decorated with a single rose and feathers on one side and a plume on the other, as well as the Blackbeard Pirates' Jolly Roger printed on the front, a corset that's longer on the back and extends all the way down to her knee area, a striped dress shirt, a cravat and heels that are slightly different from her previous ones. Her pants now have a pair of belts closing its hems. She also carries a sword on her right hip. 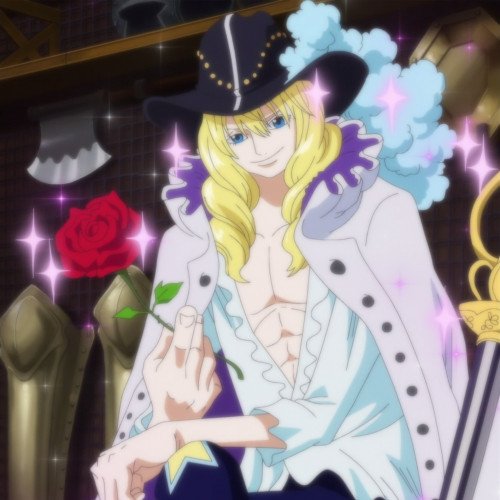 Cavendish of the White Horse, also known as the "Pirate Prince", is a famous Super Rookie and the captain of the Beautiful Pirates.[3] He joined as a gladiator at the Corrida Colosseum to compete for the Mera Mera no Mi.[1] After the final battle against Donquixote Doflamingo, Cavendish decided to pledge his loyalty to Monkey D. Luffy and became the captain of the first ship of the Straw Hat Grand Fleet.[4] He suffers from a split personality, changing into a bloodthirsty lunatic known as Hakuba when his dominant personality sleeps. He was formerly the prince of the Bourgeois Kingdom before he was exiled.[5] He is an ally of Luffy during the Dressrosa Arc, and one of the central characters from The Stories of the Self-Proclaimed Straw Hat Grand Fleet Cover Page Serial.