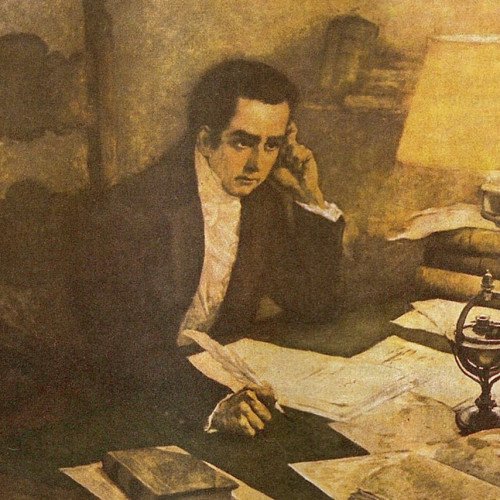 Mariano Moreno (Spanish pronunciation: [maˈɾjano moˈɾeno]; September 23, 1778 – March 4, 1811[1]) was an Argentine lawyer, journalist, and politician. He played a decisive role in the Primera Junta, the first national government of Argentina, created after the May Revolution. Moreno was born in Buenos Aires in 1778. His father was Manuel Moreno y Argumosa, born in Santander, Spain, who arrived in the city in 1776 and married María del Valle. Mariano was the firstborn of the Moreno family and had thirteen brothers. During his youth he studied Latin, logic, and philosophy at San Carlos Royal College, followed by college studies of law at Chuquisaca. During these studies, he learned the new ideas of the Spanish Enlightenment. He married María Guadalupe Cuenca and returned to Buenos Aires, becoming a prominent lawyer for the Cabildo. Unlike most other criollos, he rejected the Carlotist project and the administration of Santiago de Liniers, joining instead the ill-fated mutiny of Álzaga against him. He worked for the next viceroy, Baltasar Hidalgo de Cisneros. He wrote the economic paper The Representation of the Landowners, which persuaded the viceroy to open trade with Britain. Although he was not prominently involved in the May Revolution that deposed Cisneros, he was appointed as secretary of war of the new government, the Primera Junta. Along with Juan José Castelli, he promoted harsh policies against the supporters of the former government and the strengthening of the new one. These policies were detailed in a secret document, the Operations plan; some historians dispute its authorship. Moreno organized military campaigns to Paraguay and Upper Peru and ensured the execution of Santiago de Liniers after the defeat of his counter-revolution. He established the first Argentine newspaper, La Gazeta de Buenos Ayres, and translated Jean-Jacques Rousseau's The Social Contract into Spanish. When the Junta achieved the first military victories, President Cornelio Saavedra opposed Moreno, favoring moderate policies instead. Allied with Gregorio Funes, Saavedra expanded the number of members of the Junta to leave Morenism in a minority. With disputes still going on, Moreno was appointed to a diplomatic mission to Britain but died at sea on the way there. His brother Manuel Moreno alleged that he was poisoned. His supporters were still an influential political party for some years after his death. Historians hold several perspectives about the role and historical significance of Moreno, from hagiography to repudiation. He is considered the precursor of Argentine journalism. 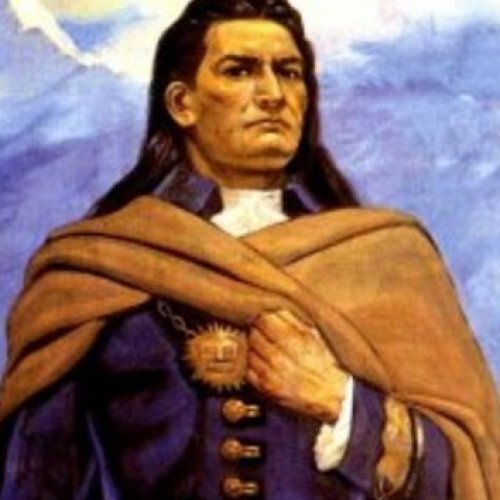 José Gabriel Túpac Amaru (March 10, 1738 – May 18, 1781) — known as Túpac Amaru II — was the leader of a large Andean uprising against the Spanish in Peru, whose quelling resulted in his death.[1] He later became a mythical figure in the Peruvian struggle for independence and indigenous rights movement, as well as an inspiration to myriad causes in Spanish America and beyond. Túpac Amaru II was born José Gabriel Condorcanqui Noguera between March 8 and 24, 1738 in Surimana, Tungasuca, in the province of Cusco, to Miguel Condorcanqui Usquionsa Tupac Amaru, kuraka of three towns in the Tinta district, and María Rosa Noguera. On May 1, Túpac Amaru II was baptized by Santiago José Lopez in a church in Tungasuca. Prior to his father's death, Amaru II spent his childhood in the Vilcamayu Valley; he accompanied his father to community functions, such as the temple, the market, and processions.[2] Tupac's parents died when he was twelve years old, and he was raised by an aunt and uncle. At age sixteen, he received a Jesuit education at the San Francisco de Borja School, founded to educate the sons of kurakas. The Jesuits "impressed upon him his social standing as future kuraka and someone of royal Inca blood."[3] At age twenty-two, Túpac Amaru II married Micaela Bastidas.[4] Shortly after his marriage, Amaru II succeeded his father as kuraka, giving him rights to land. As with his father, he was both the head of several Quechua communities and a regional merchant and muleteer, inheriting 350 mules from his father's estate. His regional trading gave him contacts in many other indigenous communities and access to information about economic conditions. His personal contacts and knowledge of the region were useful in the rebellion of 1780–81.[5] His status in the colonial Spanish racial hierarchy has been discussed by scholars, whether he was of "pure indigenous blood" or a mixed-race mestizo, although his mother most likely had partial Spanish ancestry. He was recognized as an elite Quechua from a kuraka family and was educated at a school in Cuzco for sons of indigenous leaders. He spoke Quechua and Spanish, and learned Latin from the Jesuits. He was upwardly socially mobile, and in Cuzco he had connections with distinguished Spanish and Spanish American (creole) residents. "The upper classes in Lima saw him as a well-educated Indian,"[6] whatever European ancestry he might have had. Between 1776 and 1780 Condorcanqui went into litigation with the Betancur family over the right of succession of the Marquisate of Oropesa and lost the case.[7] In 1760, he married Micaela Bastidas Puyucahua of Afro-Peruvian and indigenous descent. Tupac Amaru II inherited the caciqueship, or hereditary chiefdom of Tungasuca and Pampamarca from his older brother, governing on behalf of the Spanish governor.