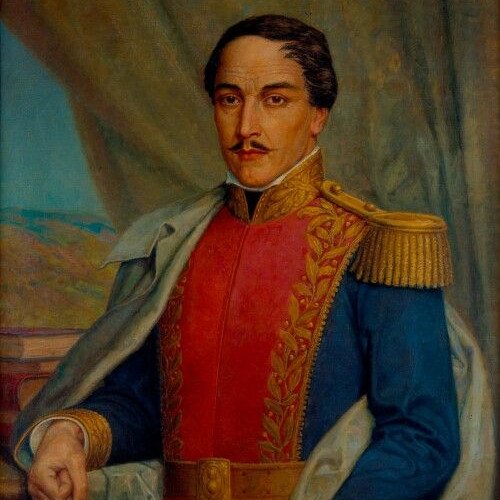 Francisco José de Paula Santander y Omaña (Villa del Rosario, Norte de Santander, Colombia, April 2, 1792 – Santafé de Bogotá, Colombia, May 6, 1840), was a Colombian military and political leader during the 1810–1819 independence war of the United Provinces of New Granada (present-day Colombia). He was the acting President of Gran Colombia between 1819 and 1826, and later elected by Congress as the President of the Republic of New Granada between 1832 and 1837. Santander came to be known as "The Man of the Laws" ("El Hombre de las Leyes"). Santander was born in Villa del Rosario, Norte de Santander, on April 2, 1792. His parents were Juan Agustín Santander Colmenares who was governor of the rural province of San Faustino de los Ríos as well as a cocoa grower, and his mother; Manuela Antonia de Omaña Rodríguez. Both were descendants of aristocratic Spanish families who had settled in the New Kingdom of Granada. He was a freemason.[2] He died due to gallstones in Santa Fe de Bogotá, Cundinamarca, on March 6, 1840. A law student, he began his military career at the young age of eighteen, following the establishment of juntas in 1810, which began the process of independence in New Granada. Santander enlisted in the revolutionary army in October 1810, in the battalion the National Guard ("Guardias Nacionales").[1] He first served as a soldier in army of the federalist United Provinces of New Granada, under the command of General Antonio Baraya, that fought against General Antonio Nariño, of the Province of Cundinamarca, who had refused to recognize the authority of the Union.[4] During these campaigns Santander achieved the rank of colonel in 1812. After the royalist forces re-conquered New Granada, Santander like many other New Granadan officers retreated to the plains east of the Cordillera Oriental, the Llanos, near the modern Venezuelan border. There, Santander joined forces with Venezuelan patriots and operated under the command of Simón Bolívar. During the military campaign across the Andes, Bolívar promoted Santander to Brigadier General in 1817.[4] By 1819, Santander was given command of the republican army's vanguard by Bolívar during the campaign to liberate New Granada. Santander was one of the battlefield commanders during the republican victory at the battle of "el Pantano de Vargas" (Battle of Vargas Swamp) and later at the Battle of Boyacá, on August 7 of that same year.[4] After these battles, he was promoted to Commanding General, the equivalent of a modern major general. 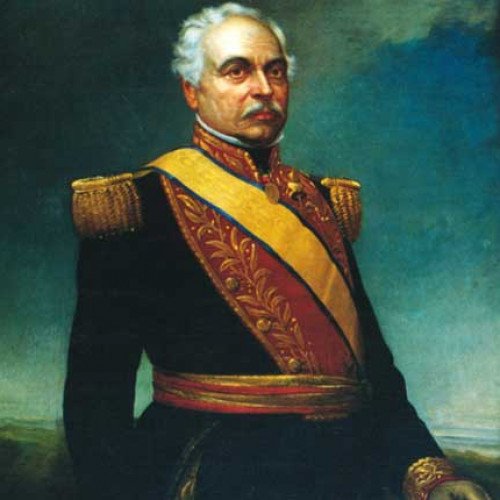 José Antonio Páez Herrera (Spanish pronunciation: [xo.ˈse ãn̪.ˈto.njo ˈpa.es ɛ.ˈrɛ.ɾa]; 13 June 1790 – 6 May 1873) was a Venezuelan leader who fought against the Spanish Crown for Simón Bolívar during the Venezuelan War of Independence. He later led Venezuela's independence from Gran Colombia. He dominated the country's politics for most of the next two decades once the country had achieved independence from Gran Colombia, serving either as president of Venezuela (1830–1835; 1839–1843; 1861–1863) or as the power behind puppet presidents. He is considered a prime example of a 19th-century South American caudillo, and imbued the country with a legacy of authoritarian rule that lasted, with few exceptions, until 1958. He lived in Buenos Aires and New York City during his years in exile and died in the latter in 1873. Páez was born in Curpa (now part of Acarigua), Portuguesa State in the Captaincy General of Venezuela – part of the Spanish Empire. His paternal grandmother, Luisa Antonia de Mendoza y Mota, was daughter of Luís Rodríguez de Mendoza, a native of Icod de los Vinos, Tenerife (Canary Island). He was of humble origins, his father being a low level employee of the colonial government. As a boy he was forced to work like a slave. By the age of 20 Páez was married and earning a living by trading cattle. Late in 1810, he joined a cavalry squadron, led by a former employer, set up with the purpose of fighting the colonial government. In 1813, he asked for leave from his squadron with the intent of setting and leading his own, which he did, joining the Western Republican Army with the rank of sergeant. Páez had an ingratiating personality which made him very much liked amongst those who knew him. He was also looked up to for his skills as a horseman and for his physical capabilities.