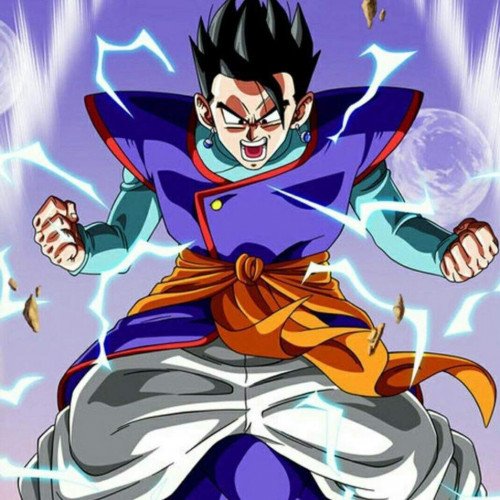 Son Gohan (Japanese: 孫 悟飯) is a character in the Dragon Ball manga series, created by Akira Toriyama. Gohan is introduced as the first son of the protagonist Goku, and his wife Chi-Chi, in chapter #196 Kakarrot (カカロット, Kakarotto), first published in Weekly Shōnen Jump magazine on October 8, 1988.[1] Chi-Chi is a strict and protective mother to Gohan, forcing him to focus on his studies and forbidding him from practicing martial arts. However, due to the various threats to the Earth, she reluctantly allows him to fight, with him ultimately becoming one of the strongest characters in the series. Gohan has been well received by both fans and critics, the latter usually citing the character's growth from his initial appearance to his defeat of Cell. Gohan's name comes from the Japanese word "gohan" (ご飯, lit. "cooked rice" or "meal of any sort"), a continuation of the naming scheme of foods by Toriyama. Rice, being a grain, is not normally considered to be a vegetable, even though it is a common food. However, as the word "vegetable" is a culinary term, and not a botanical term, the name can also continue the naming scheme for Saiyan characters, which derives names from puns on vegetables.[2] In conceptualizing for Gohan's character, Toriyama originally included glasses or a jacket to his apparel, and commonly, his hair is spiked up as seen in the final design.[3] With the ending of the Cell arc, Gohan was meant to replace his father as the protagonist. However, Toriyama later decided against it, finding the character unsuited for the role in comparison to his father.[4] As opposed to full-blooded Saiyans, whose hair stays the same from birth,[5] Gohan's is drawn at varying lengths, and changes markedly in style. Initially, Gohan is illustrated garbed in a surcoat with kanji 孫 (grandchild), fixed on the front and the four-star Dragon Ball fitted on top of his hat. Piccolo later supplies him with a keikogi fashioned after Goku's, but substitutes the symbol with his own demon character "魔".[6] Normally thereafter, Gohan is drawn with a keikogi modeled after Piccolo's own. On Namek, Gohan is portrayed in battle armor worn by Frieza's henchmen, having been given it by Vegeta in preparation for their encounter with Frieza. Prior to his second fight with Majin Buu, Gohan asks Kibito for an outfit resembling his father's, and is then drawn in a keikogi identical to Goku's. Gohan, from the alternate future, is dressed in a keikogi similar to that of his father's with his kanji name 飯 (Gohan), and has a long scar across his left eye. 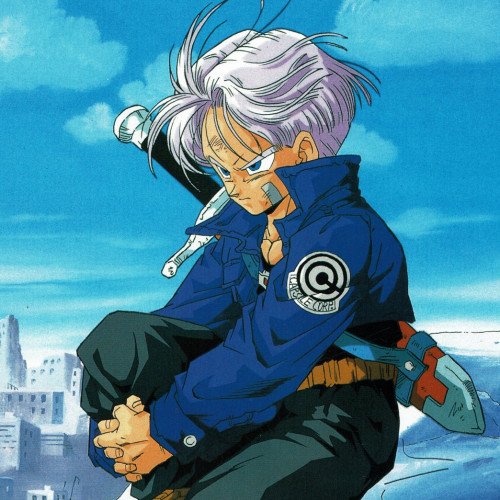 Trunks (Japanese: トランクス, Hepburn: Torankusu) is a character in the Dragon Ball manga series created by Akira Toriyama. Within the series, he is the half-Saiyan half-Human son of Vegeta and Bulma and has at least two noteworthy incarnations. Trunks makes his debut appearance in chapter #331 The Young Boy of Mystery (謎の少年, Nazo no Shōnen), first published in Weekly Shōnen Jump magazine on July 2, 1991,[1] as an unidentified young man who traveled back in time to warn series protagonist Goku and his allies of a deadly new enemy, the Androids of the Red Ribbon Army. This alternate future timeline incarnation of Trunks, who is usually referred to as "Future Trunks" (未来のトランクス, Mirai no Torankusu, "Trunks of the Future") in media to distinguish him from his present-timeline counterpart, is one of the Dragon Ball series' most popular characters and has been praised for his unique role within the series. The present-timeline incarnation of Trunks is introduced as an infant during the story arc which features the first appearance of the Red Ribbon Androids. This version of Trunks makes recurring appearances as a major character in the Dragon Ball Z, Dragon Ball Super and various other media such as Dragon Ball GT and films produced by Toei Animation. In the original Japanese version of the entire Dragon Ball Z anime series and in all other media, Trunks is voiced by Takeshi Kusao. Akira Toriyama stated that it was difficult to decide on Present Trunks' voice. The producer at Toei Animation and the editorial department discussed that, perhaps, it would be better if they changed to a different voice actor for the child version. At that time, the serialization was still going on, and Toriyama did not know how the manga story would end; young Trunks might have ended up growing up and the story might have continued to the same time period when teenage Trunks returned to the future. In that case, if the voice actor would have been changed, it would have sounded strange. Eventually, Kusao ended up also voicing Trunks as a child and, after listening a few times, Toriyama felt that it was the right choice.[2] However, the cries given by the character's infant form were provided by Hiromi Tsuru in an uncredited role.