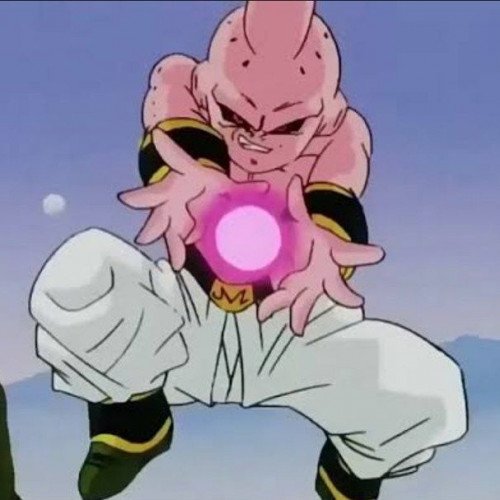 Majin Buu (Japanese: 魔人ブウ, Hepburn: Majin Bū), generally spelled Majin Boo in subtitles of the Japanese anime, and rendered as Djinn-Boo in the Viz Media manga, is a fictional character and the final antagonist in the Dragon Ball manga series created by Akira Toriyama, before the release of Dragon Ball Super. He is introduced in chapter #460 Majin Boo Appears?! (魔人ブウ出現か!?, Majin Bū Shutsugen ka!?) first published in Weekly Shōnen Jump magazine on March 1, 1994.[1] Majin Buu is a genie-like magical life form awoken by the evil warlock Bibidi that terrorized galaxies by destroying entire planets, millions of years before the events of Dragon Ball take place. He was temporarily sealed away and brought to Earth; however, Bibidi was killed and Buu remained hidden. During the events of Dragon Ball, he is revived by Bibidi's son Babidi in order to carry on his father's plan to conquer the entire universe. Manga author Akira Toriyama stated that when creating a villain in Dragon Ball, he would try to make them different from any that had come before. Although it was difficult and he was usually not entirely pleased with the results, he thinks he did achieve this with Majin Buu.[2] The Shenlong Times issue #2, a bonus pamphlet given to some buyers of the Daizenshuu 2: Story Guide guidebook, says that Majin Buu was modeled after Toriyama's editor at the time, Fuyuto Takeda.[3] Buu, Bibidi and Babidi take their names from the song "Bibbidi-Bobbidi-Boo" in the Walt Disney movie Cinderella.[4] Majin Buu has several different forms, each with a different appearance and personality, however, all are pink creatures (with the exception of Pure Evil Majin Buu, which is dark grey) with an antenna on their head and several holes/pores on both sides of their heads, arms, chest and vertebrae. They have a rubbery body (again, with the exception of Pure Evil Majin Buu) that can regenerate instantly from any wound,[5] separate parts of it from themselves and control them independently,[6] and can even completely restore themselves from vapor.[7] Buu can also heal damaged beings,[8] and can absorb other organisms by enveloping them with his body or eating them,[9] the latter done by using his signature attack that turns people into food such as candy. 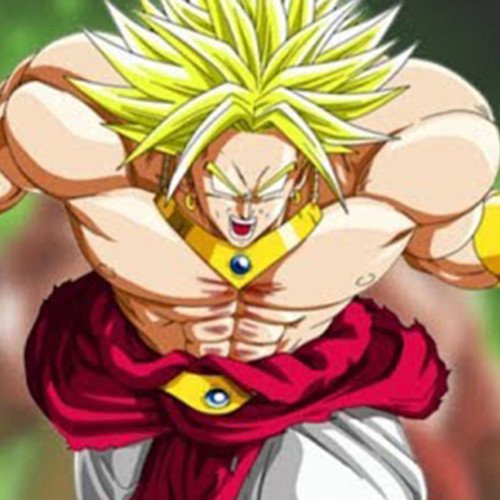 Broly (ブロリー, Burorī) is a fictional character within the Dragon Ball series. Two versions of the character exist: the original Broly, a major villain who appeared in a trilogy of '90s Dragon Ball Z anime films, Broly – The Legendary Super Saiyan (1993), Broly – Second Coming (1994), and Bio-Broly (1994); along with a CGI animated film in 2017 called Dragon Ball Z: The Real 4-D at Super Tenkaichi Budokai, followed by a new version that debuted in the film Dragon Ball Super: Broly (2018), and once again served as the primary antagonist and major anti-hero in the film. The character of Broly was created by Takao Koyama, who was inspired to create a menacing and powerful Saiyan villain after watching Future Trunks transforming into his Super Saiyan grade 3 form during the Cell Games anime arc, and designed by Dragon Ball creator, Akira Toriyama.[1] Following the Saiyan race's usual naming trend, which is based on vegetables, Broly's name is a pun on broccoli, while his father Paragus is a pun on asparagus. Besides flashback scenes of Broly as an infant in the 1990's movies as well as Toriyama's design sheets of that version of the character, neither the original nor the reworked version of Broly is seen with a tail, which is considered to be a defining characteristic of a Saiyan character within the series.[2] A female Saiyan character named Kale is depicted as the original version of Broly's mirror equivalent, primarily due to her "Berserk" form, which is very similar to Broly's Legendary Super Saiyan Form.[3] She appears in Dragon Ball Super during the Universe Survival Saga story arc.