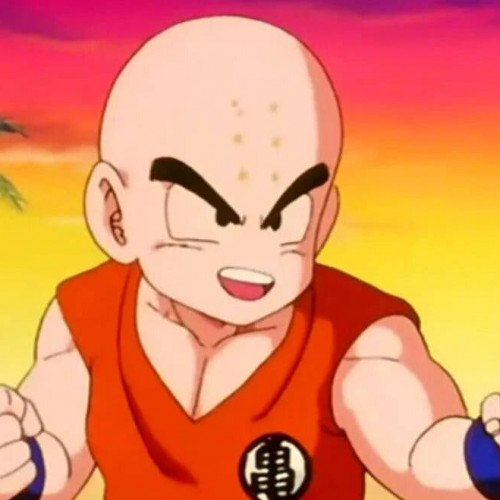 Krillin (Japanese: クリリン, Hepburn: Kuririn), known as Kuririn in Funimation's English subtitles and Viz Media's release of the manga, and Kulilin in Japanese merchandise English translations, is a fictional character in the Dragon Ball manga series created by Akira Toriyama. He is introduced in chapter #25 A Rival? Arrival!! (ライバル？参上!!, Raibaru? Sanjō!!), first published in Weekly Shōnen Jump magazine on May 21, 1985,[4] as Goku's fellow martial arts student under Kame-Sen'nin. As the series progresses, Krillin becomes Goku's closest ally and best friend as he fights every villain along with Goku or before him and is often depicted as the comic relief due to his baldness. Toriyama originally created Krillin along with the Tenka'ichi Budōkai as a method to help add depth to the story, as his editor Kazuhiko Torishima had stated that the series' protagonist, Goku, was too plain.[5] Torishima explained that in order to develop Goku's characterization, they needed someone petty and mischievous to provide contrast, thus leading to the introduction of Krillin.[6] Yūsuke Watanabe, who wrote the screenplay for the film Dragon Ball Z: Battle of Gods, had originally written the film to take place at Krillin and Android #18's wedding, but Toriyama wrote it to take place at Bulma's birthday party. Watanabe thought Toriyama made the change because he wanted fans to imagine the wedding for themselves.[7] Toriyama cited Krillin and Bulma's older ages at the end of the manga as a reason he chose for Battle of Gods to take place after the Boo arc since they were in their "strongest condition at that time."[8] Krillin's appearance stays relatively the same for the majority of the series. He is first introduced at age 13, with a shaved head and still dressed in the yellow-and-orange clothing worn at the monastery at which he had been training. He does not possess a visible nose, and has six spots of moxibustion burns on his forehead, a reference to the practice of Shaolin monks. Toriyama once stated, seemingly humorously, that Krillin's lack of a nose is because he has a "physical idiosyncrasy" that allows him to breathe through the pores of his skin.[9] Later, he wears the orange gi uniform that is presented to both himself and Goku by Kame-Sen'nin in honor of their first martial arts competition.[10] Occasionally he is seen in casual clothes, but for the most part continues to dress for training or fighting at all times.[11] During the Frieza arc, he wears Saiyan armor provided by Vegeta,[12] but during the Cell arc he returns to wearing the orange gi, accompanied by a blue short-sleeved undershirt and boots.[13] After the defeat of Cell, Krillin stops shaving his head, and grows his black hair out, before later shaving it again during Frieza's resurrection.[14] When he settles down with his family, Krillin is shown wearing a workout outfit consisting of a red "Tacos" T-shirt and brown drawstring pants. 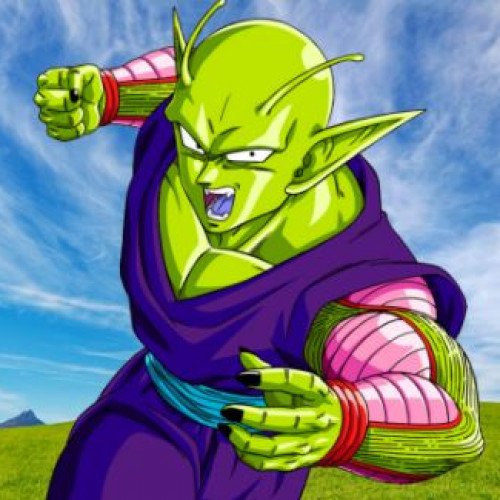 Piccolo (Japanese: ピッコロ, Hepburn: Pikkoro) is a fictional character in the Dragon Ball media franchise created by Akira Toriyama. He is first seen in chapter #161 Son Goku Wins!! (孫悟空勝つ!!, Son Gokū Katsu!!), published in Weekly Shōnen Jump magazine on February 9, 1988,[1] as the reincarnation of the evil Piccolo Daimaō, who was positioned as a demonic antagonist of the series. However, it is later revealed that he is in fact a member of an extraterrestrial humanoid species called Namekians, those able to create the series' eponymous wish-granting Dragon Balls. After losing to Son Goku, Piccolo decides to team up with him and his friends in order to defeat newer, more dangerous threats, such as Vegeta, Frieza, Cell and Majin Buu. He also trains Goku's eldest child Gohan in martial arts, with the two forming a strong bond. Piccolo is one of the most popular and recognizable characters of the Dragon Ball franchise. The character has been consistently well received by fans and video game publications, with high placements in multiple "top" character lists and popularity polls. The character has also inspired Naruto manga author Masashi Kishimoto, as well as an internet meme which became popular in Japan in 2013. Piccolo, more specifically his parent Piccolo Daimaō, was created by Toriyama as he wanted to have a villain who would be a true "bad guy." Prior to his creation, nearly all the previous villains in the series were considered too likable.[2] His editor, Kazuhiko Torishima, stated he introduced Toriyama to evil historical figures for inspiration. Piccolo Daimaō was created after he told the author how Roman Emperor Nero enjoyed watching people suffer.[3] However, the Shenlong Times issue #2, a bonus pamphlet given to some buyers of the Daizenshuu 2: Story Guide guidebook, says that the character was modeled after Torishima himself.[4] After creating Piccolo Daimaō, Toriyama noted that it was one of the most interesting parts of the series and that he became one of his favorite characters.[2] Although Piccolo's transformation from a villain to a hero was considered by Toriyama to be cliché, he still felt excited when drawing him, noting that despite having a scary face, he still looks appealing.