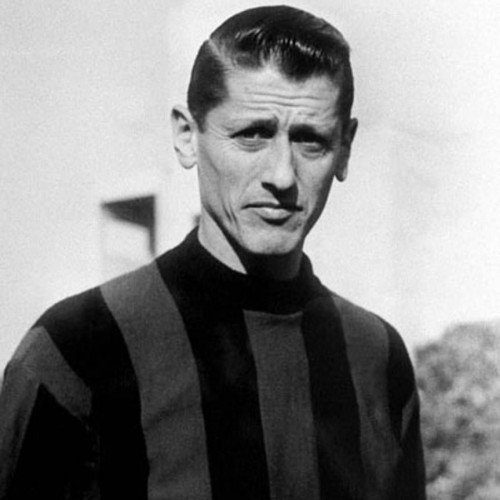 Juan Alberto "Pepe" Schiaffino Villano (Italian pronunciation: [skjafˈfiːno]; 28 July 1925 – 13 November 2002)[2] was an Italian-Uruguayan football player who played as an attacking midfielder or forward. A highly skilful and creative playmaker, at club level, he played for CA Peñarol in Uruguay, and for A.C. Milan, and Roma in Italy. At international level, he won the 1950 FIFA World Cup with the Uruguayan national team, and also took part at the 1954 FIFA World Cup; he later also represented the Italy national football team.[1][3][4][5][6] He was ranked as the best Uruguayan footballer of all time by an IFFHS poll, and the 17th greatest player of the twentieth century. Following his eight successful years in Peñarol in his native Uruguayan league, Schiaffino was purchased by Italian Serie A club A.C. Milan, for an at the time world record fee of 52 million Lire, in September 1954.[4] He played 171 games with A.C. Milan and scored 60 goals, and participated in the 1958 European Cup Final, which Milan lost to Real Madrid 2–3 (aet). He was among the crucial offensive players in a Milan team that was dominated by foreign stars such as Nils Liedholm and Gunnar Nordahl. Schiaffino won three national championships with Milan, the victories being in 1955, 1957 and 1959.[8] Schiaffino left in 1960 to join Roma, where he played out his career during two moderately successful seasons, in which Roma finished fifth in the standings. Schiaffino played for two national teams; first with the Uruguyan national team from 1946 to 1954, and later with the Italian national team from 1954 to 1958, courtesy of his paternal grandfather who was a Ligurian from the province of Genoa.[4] He obtained 21 caps with the Uruguyan national team, scoring nine goals, and four caps with the Italian national team. Schiaffino participated actively in Uruguay's victory in the 1950 World Cup, scoring one goal in the final and beating Brazil in its own stadium, in what was called the Maracanazo. He also played in the 1954 World Cup, helping his nation to a fourth-place finish in the tournament.

The greatest Uruguayan soccer player 50 %
50 % He is good, but not the best 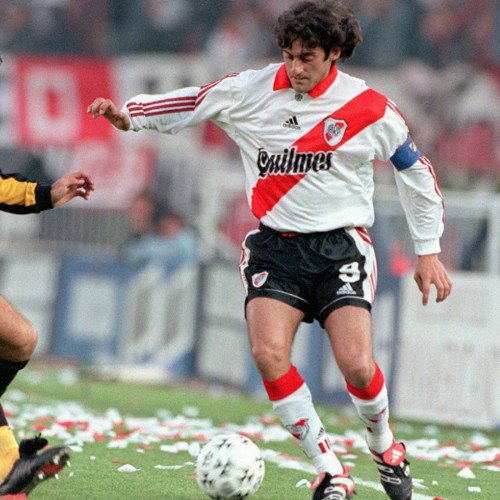 Enzo Francescoli Uriarte (Spanish pronunciation: [ˈenso fɾansesˈkoli uˈɾjaɾte]; born 12 November 1961) is a former Uruguayan football player. Due to his elegant style of play, Francescoli was nicknamed "El Príncipe" ("The Prince" in Spanish, or "Le Prince" in French), and "El Flaco" due to his slender frame. A former attacking midfielder, he was considered an elite playmaker in a decadent period for the Uruguay national team. He played 73 times for the Celeste between 1982 and his retirement in 1997, making him the most capped outfield player in Uruguayan international football at the time.[1] He represented his nation at two FIFA World Cups, in 1986 and 1990, also winning the Copa América in 1983, 1987 and 1995. At club level, Francescoli began his career with Uruguayan club Wanderers. In neighbouring Argentina, he played for River Plate. He was the leading scorer and a key player for the club's second Copa Libertadores title. Francescoli won a total of five Argentine titles in the six years in which he played for the club. He also enjoyed success in France with Racing Paris and Marseille, where his performances proved decisive as the team won the 1989–90 French Division 1.[2][3] He later also had spells in Italy with Cagliari and Torino, before returning to River Plate, where he ended his career. Regarded as one of the best number 10s of his generation, and as one of Uruguay's and South America's greatest ever players, Francescoli was the only Uruguayan included by Pelé in the FIFA 100 list of the world's greatest living footballers in 2004, and he was also elected by the International Federation of Football History & Statistics as the sixth-greatest Uruguayan player and the 24th greatest South American player of the 20th century.

The greatest Uruguayan soccer player 50 %
50 % He is good, but not the best