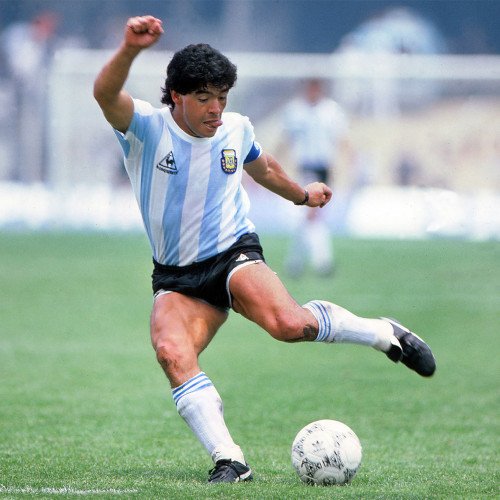 Diego Armando Maradona (Spanish: [ˈdjeɣo maɾaˈðona]; 30 October 1960 – 25 November 2020) was an Argentine professional football player and manager. Widely regarded as one of the greatest players in the history of the sport, he was one of the two joint winners of the FIFA Player of the 20th Century award.[3][4] Maradona's vision, passing, ball control, and dribbling skills were combined with his small stature, which gave him a low centre of gravity allowing him to manoeuvre better than most other players. His presence and leadership on the field had a great effect on his team's general performance, while he would often be singled out by the opposition. In addition to his creative abilities, he possessed an eye for goal and was known to be a free kick specialist. A precocious talent, Maradona was given the nickname "El Pibe de Oro" ("The Golden Boy"), a name that stuck with him throughout his career.[5] He also had a troubled off-field life and was banned in both 1991 and 1994 for abusing drugs.[6] An advanced playmaker who operated in the classic number 10 position, Maradona was the first player to set the world record transfer fee twice: in 1982 when he transferred to Barcelona for £5 million, and in 1984 when he moved to Napoli for a fee of £6.9 million.[7] He played for Argentinos Juniors, Boca Juniors, Barcelona, Napoli, Sevilla, and Newell's Old Boys during his club career, and is most famous for his time at Napoli and Barcelona, where he won numerous accolades. In his international career with Argentina, he earned 91 caps and scored 34 goals. Maradona played in four FIFA World Cups, including the 1986 World Cup in Mexico, where he captained Argentina and led them to victory over West Germany in the final, and won the Golden Ball as the tournament's best player. In the 1986 World Cup quarter final, he scored both goals in a 2–1 victory over England that entered football history for two different reasons. The first goal was an unpenalized handling foul known as the "Hand of God", while the second goal followed a 60 m (66 yd) dribble past five England players, voted "Goal of the Century" by FIFA.com voters in 2002.[8] Maradona became the coach of Argentina's national football team in November 2008. He was in charge of the team at the 2010 World Cup in South Africa before leaving at the end of the tournament. He then coached Dubai-based club Al Wasl in the UAE Pro-League for the 2011–12 season. In 2017, Maradona became the coach of Fujairah before leaving at the end of the season.[9] In May 2018, Maradona was announced as the new chairman of Belarusian club Dynamo Brest.[10] He arrived in Brest and was presented by the club to start his duties in July.[11] From September 2018 to June 2019, Maradona was coach of Mexican club Dorados.[12] He was the coach of Argentine Primera División club Gimnasia de La Plata from September 2019 until his death in November 2020.

The greatest Argentine soccer player 50 %
50 % He is good, but not the best 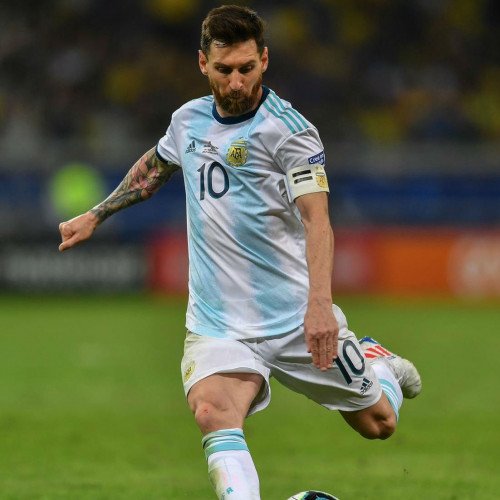 Lionel Andrés Messi[note 1] (Spanish pronunciation: [ljoˈnel anˈdɾes ˈmesi] (About this soundlisten);[A] born 24 June 1987) is an Argentine professional footballer who plays as a forward and captains both the Spanish club Barcelona and the Argentina national team. Often considered as the best player in the world and widely regarded as one of the greatest players of all time, Messi has won a record six Ballon d'Or awards[note 2] and a record six European Golden Shoes. He has spent his entire professional career with Barcelona, where he has won a club-record 34 trophies, including ten La Liga titles, six Copa del Rey titles and four UEFA Champions Leagues. A prolific goalscorer and creative playmaker, Messi holds the records for most goals in La Liga (463), a La Liga and European league season (50), most hat-tricks in La Liga (36) and the UEFA Champions League (8), and most assists in La Liga (187), a La Liga and European league season (21)[9] and the Copa América (12). He has scored over 750 senior career goals for club and country, and has the most goals ever by a player for a single club. Born and raised in central Argentina, Messi relocated to Spain to join Barcelona at age 13, for whom he made his competitive debut aged 17 in October 2004. He established himself as an integral player for the club within the next three years, and in his first uninterrupted season in 2008–09 he helped Barcelona achieve the first treble in Spanish football; that year, aged 22, Messi won his first Ballon d'Or. Three successful seasons followed, with Messi winning four consecutive Ballons d'Or, making him the first player to win the award four times and in a row.[10] During the 2011–12 season, he set the La Liga and European records for most goals scored in a single season, while establishing himself as Barcelona's all-time top scorer. The following two seasons, Messi finished second for the Ballon d'Or behind Cristiano Ronaldo (his perceived career rival), before regaining his best form during the 2014–15 campaign, becoming the all-time top scorer in La Liga and leading Barcelona to a historic second treble, after which he was awarded a fifth Ballon d'Or in 2015. Messi assumed the captaincy of Barcelona in 2018, and in 2019 he secured a record sixth Ballon d'Or. An Argentine international, Messi is his country's all-time leading goalscorer. At youth level, he won the 2005 FIFA World Youth Championship, finishing the tournament with both the Golden Ball and Golden Shoe, and an Olympic gold medal at the 2008 Summer Olympics. His style of play as a diminutive, left-footed dribbler drew comparisons with his compatriot Diego Maradona, who described Messi as his successor. After his senior debut in August 2005, Messi became the youngest Argentine to play and score in a FIFA World Cup during the 2006 edition, and reached the final of the 2007 Copa América, where he was named young player of the tournament. As the squad's captain from August 2011, he led Argentina to three consecutive finals: the 2014 FIFA World Cup, for which he won the Golden Ball, and the 2015 and 2016 Copa América. After announcing his international retirement in 2016, he reversed his decision and led his country to qualification for the 2018 FIFA World Cup, and a third-place finish at the 2019 Copa América. One of the most famous athletes in the world, Messi has been sponsored by sportswear company Adidas since 2006 and has established himself as their leading brand endorser. According to France Football, he was the world's highest-paid footballer for five years out of six between 2009 and 2014, and was ranked the world's highest-paid athlete by Forbes in 2019. Messi was among Time's 100 most influential people in the world in 2011 and 2012. In February 2020, he was awarded the Laureus World Sportsman of the Year, thus becoming the first footballer and also the first team sport athlete to win the award. Later that year, Messi became the second footballer (and second team-sport athlete) to surpass $1 billion in career earnings.

The greatest Argentine soccer player 50 %
50 % He is good, but not the best