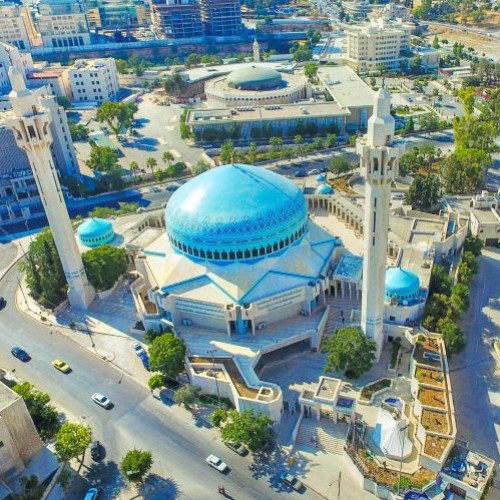 The King Abdullah I Mosque (Arabic: مسجد الملك عبد الله الأول‎) in Amman, Jordan was built between 1982 and 1989. It is capped by a magnificent blue mosaic dome beneath which 3,000 Muslims may offer prayer. Tourists are allowed to visit. Men must have long trousers on and women must cover their heads, arms and legs. A hooded gown is provided free of charge for this purpose. 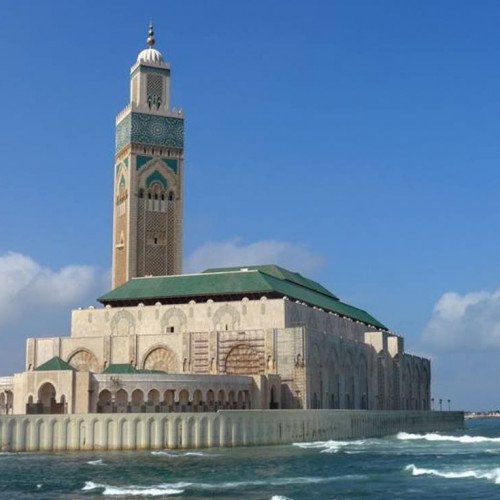 The Hassan II Mosque (Arabic: مسجد الحسن الثاني‎, French: Grande Mosquée Hassan II) is a mosque in Casablanca, Morocco. It is the second largest functioning mosque in Africa and is the 7th largest in the world. Its minaret is the world's second tallest minaret at 210 metres (689 ft). Completed in 1993, it was designed by Michel Pinseau under the guidance of King Hassan II and built by Moroccan artisans from all over the kingdom. The minaret is 60 stories high topped by a laser, the light from which is directed towards Mecca. The mosque stands on a promontory looking out to the Atlantic Ocean; worshippers can pray over the sea but there is no glass floor looking into the sea. The walls are of hand-crafted marble and the roof is retractable. A maximum of 105,000 worshippers can gather together for prayer: 25,000 inside the mosque hall and another 80,000 on the mosque's outside ground.