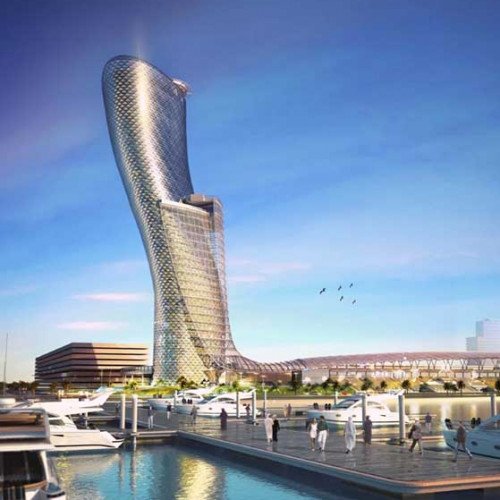 Capital Gate, also known as the Leaning Tower of Abu Dhabi, is a skyscraper in Abu Dhabi that is over 160 meters (520 ft) tall, 35 stories high, with over 16,000 square meters (170,000 sq ft) of usable office space. Capital Gate is one of the tallest buildings in the city and was designed to incline 18° west. The building is owned and was developed by the Abu Dhabi National Exhibitions Company. The tower is the focal point of Capital Centre. 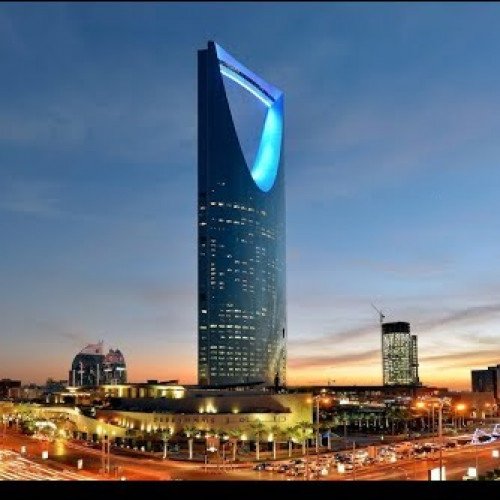 Kingdom Centre (Arabic: مركز المملكة) is a 99-story, 302.3 m (992 ft) skyscraper in Riyadh, Saudi Arabia. When completed in 2002, it overtook the 267-meter Faisaliyah Tower as the tallest tower in Saudi Arabia. It has since been surpassed and is now the fifth-tallest skyscraper in the country, whose tallest two buildings are the Abraj Al Bait Towers and the Capital Market Authority Tower. It is the world's third-tallest building with a hole after the Shanghai World Financial Center and the 85 Sky Tower in Taiwan. The tower was developed by Prince Al-Waleed bin Talal and designed by the team of Ellerbe Becket and Omrania, who were selected through an international design competition. It is situated on a 100,000–square-metre site and houses the 57,000-square-meter Al-Mamlaka shopping mall, offices, the Four Seasons Hotel Riyadh, and luxury apartments. There is a 65m skybridge atop the skyscraper.The upper third of the tower features an inverted parabolic arch topped by a public sky bridge. The sky bridge is a 300-ton steel structure, taking the form of an enclosed corridor with windows on both sides. After paying the admission fees, visitors take two elevators to reach that level.