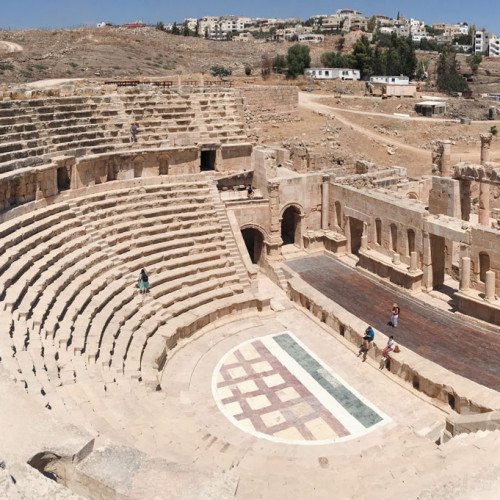 Jerash (Arabic: جرش‎; Ancient Greek: Γέρασα) is a city in northern Jordan. The city is the administrative center of the Jerash Governorate, and has a population of 50,745 as of 2015. It is located 48 kilometres (30 mi) north of the capital city Amman. The earliest evidence of settlement in Jerash is in a Neolithic site known as Tal Abu Sowan, where rare human remains dating to around 7500 BC were uncovered. Jerash flourished during the Greco and Roman periods until the mid-eighth century CE, when the 749 Galilee earthquake destroyed large parts of it, while subsequent earthquakes contributed to additional destruction. However, in the year 1120, Zahir ad-Din Toghtekin, atabeg of Damascus ordered a garrison of forty men to build up a fort in an unknown site of the ruins of the ancient city, likely the highest spot of the city walls in the north-eastern hills. It was captured in 1121 by Baldwin II, King of Jerusalem, and utterly destroyed. Then, the Crusaders immediately abandoned Jerash and withdrew to Sakib (Seecip); the eastern border of the settlement.Jerash was then deserted until it reappeared by the beginning of the Ottoman rule in the early 16th century. In the census of 1596, it had a population of 12 Muslim households. However, archaeologists found a small Mamluk hamlet in the Northwest Quarter which indicates that Jerash was resettled before the Ottoman era. The excavations conducted since 2011 have shed light on the Middle Islamic period as recent discoveries have uncovered a large concentration of Middle Islamic/Mamluk structures and pottery. The ancient city has been gradually revealed through a series of excavations which commenced in 1925, and continue to this day.Jerash today is home to one of the best preserved Greco-Roman cities, which earned it the nickname of "Pompeii of the East". Approximately 330,000 visitors arrived in Jerash in 2018, making it one of the most visited sites in Jordan. The city hosts the Jerash Festival, one of the leading cultural events in the Middle East that attracts tens of thousands of visitors every year. 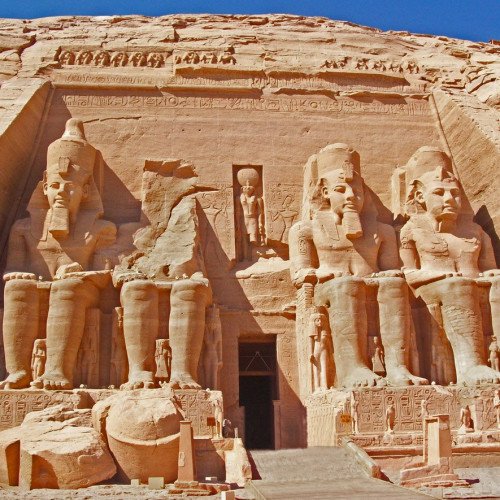 Luxor (; Arabic: الأقصر‎ l-aqṣur Egyptian Arabic pronunciation: [ˈloʔsˤoɾ], Upper Egyptian pronunciation: [ˈloɡsˤor]; Sahidic Coptic: ⲡⲁⲡⲉ Pape, pronounced [ˈpapə]) is a city in Upper (southern) Egypt and the capital of Luxor Governorate. The population of Luxor is 127,994 (2020), with an area of approximately 417 square kilometres (161 sq mi). It is among the oldest inhabited cities in the world. The modern city includes the site of the Ancient Egyptian city of Waset, also known as Nut (Coptic: ⲛⲏ) and to the Greeks as Thebes or Diospolis. Luxor has frequently been characterized as the "world's greatest open-air museum", as the ruins of the temple complexes at Karnak and Luxor stand within the modern city. Immediately opposite, across the River Nile, lie the monuments, temples and tombs of the west bank Necropolis, which includes the Valley of the Kings and Valley of the Queens. Thousands of tourists from all around the world arrive annually to visit these monuments, contributing greatly to the economy of the modern city.