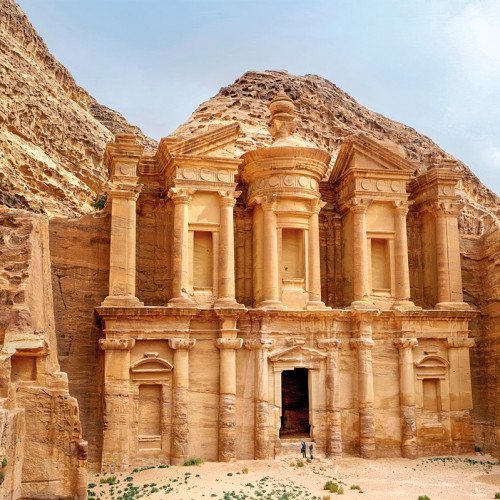 Petra (Arabic: ٱلْبَتْرَاء‎, romanized: Al-Batrāʾ; Ancient Greek: Πέτρα, "Rock"), originally known to its inhabitants in as Raqmu or Raqēmō (𐢚𐢛𐢓𐢈), is a historic and archaeological city in southern Jordan. Petra lies around Jabal Al-Madbah in a basin surrounded by mountains which form the eastern flank of the Arabah valley that runs from the Dead Sea to the Gulf of Aqaba. The area around Petra has been inhabited from as early as 7000 BC, and the Nabataeans might have settled in what would become the capital city of their kingdom, as early as the 4th century BC. However, archaeological work has only discovered evidence of Nabataean presence dating back to the second century BC, by which time Petra had become their capital. The Nabataeans were nomadic Arabs who invested in Petra's proximity to the trade routes by establishing it as a major regional trading hub.The trading business gained the Nabataeans considerable revenue and Petra became the focus of their wealth. The Nabataeans were accustomed to living in the barren deserts, unlike their enemies, and were able to repel attacks by taking advantage of the area's mountainous terrain. They were particularly skillful in harvesting rainwater, agriculture and stone carving. Petra flourished in the 1st century AD, when its famous Al-Khazneh structure – believed to be the mausoleum of Nabataean king Aretas IV – was constructed, and its population peaked at an estimated 20,000 inhabitants.Although the Nabataean kingdom became a client state of the Roman Empire in the first century BC, it was only in 106 AD that it lost its independence. Petra fell to the Romans, who annexed Nabataea and renamed it as Arabia Petraea. Petra's importance declined as sea trade routes emerged, and after an earthquake in 363 destroyed many structures. In the Byzantine era several Christian churches were built, but the city continued to decline, and by the early Islamic era it was abandoned except for a handful of nomads. It remained unknown to the West until it was rediscovered in 1812 by Johann Ludwig Burckhardt.Access to the city is through a 1.2-kilometre-long (0.75 mi) gorge called the Siq, which leads directly to the Khazneh. Famous for its rock-cut architecture and water conduit system, Petra is also called the "Rose City" because of the colour of the stone from which it is carved. It has been a UNESCO World Heritage Site since 1985. UNESCO has described Petra as "one of the most precious cultural properties of man's cultural heritage". In 2007, Al-Khazneh was voted one of the New7Wonders of the World. Petra is a symbol of Jordan, as well as Jordan's most-visited tourist attraction. Tourist numbers peaked at 918,000 in 2010, but there followed a temporary slump during the political instability generated by the Arab Spring, which affected countries surrounding Jordan. Visitor numbers subsequently increased and reached a record-breaking 1.1 million tourists in 2019, marking the first time that the figure rose above the 1 million mark. Tourism in the city was crippled by the COVID-19 pandemic as visitor numbers plummeted to zero since March 2020. The Jordanian government has authorized excavations in front of the treasury to make use of the site's emptiness. 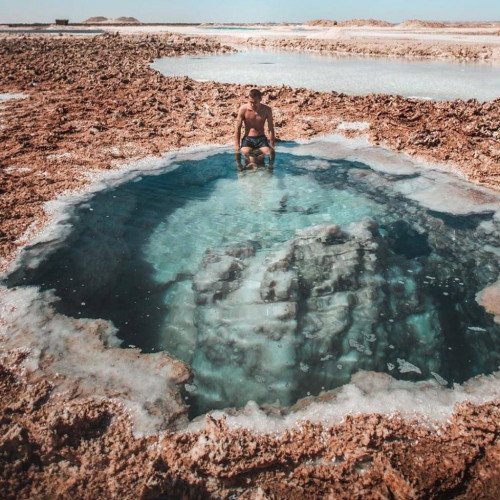 The Siwa Oasis (Arabic: واحة سيوة‎, Wāḥat Sīwah, IPA: [ˈwæːħet ˈsiːwæ]; Berber languages: Isiwan, ⵉⵙⵉⵡⴰⵏ) is an urban oasis in Egypt between the Qattara Depression and the Great Sand Sea in the Western Desert, 50 km (30 mi) east of the Libyan border, and 560 km (348 mi) from Cairo. About 80 km (50 mi) in length and 20 km (12 mi) wide, Siwa Oasis is one of Egypt's most isolated settlements with about 33,000 people, mostly Berbers, who developed a unique and isolated desert culture and a language called Siwi; they are also fluent in the Egyptian dialect of Arabic which is called "Masry" meaning Egyptian.Its fame lies primarily in its ancient role as the home to an oracle of Ammon, the ruins of which are a popular tourist attraction which gave the oasis its ancient name Oasis of Amun Ra. Historically, it was part of Ancient Egypt.