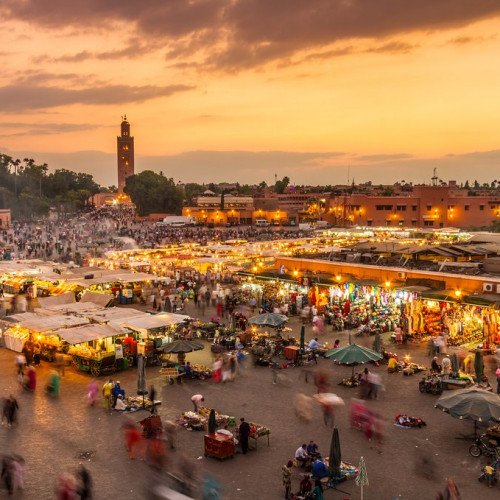 Marrakesh ( or ; Arabic: مراكش‎, romanized: murrākuš; Berber languages: ⴰⵎⵓⵔⴰⴽⵓⵛ, romanized: amurakuš) is the fourth largest city in the Kingdom of Morocco. It is the capital of the mid-southwestern region of Marrakesh-Safi. It is west of the foothills of the Atlas Mountains. Marrakesh is 580 km (360 mi) southwest of Tangier, 327 km (203 mi) southwest of the Moroccan capital of Rabat, 239 km (149 mi) south of Casablanca, and 246 km (153 mi) northeast of Agadir. The region has been inhabited by Berber farmers since Neolithic times. The city was founded in 1070 by Emir Abu Bakr ibn Umar as the imperial capital of the Almoravid Empire. The city was one of Morocco's four imperial cities. In the 12th century, the Almoravids built many madrasas (Quranic schools) and mosques in Marrakesh that bear Andalusian influences. The red walls of the city, built by Ali ibn Yusuf in 1122–1123, and various buildings constructed in red sandstone during this period, have given the city the nickname of the "Red City" (المدينة الحمراء) or "Ochre City" (ville ocre). Marrakesh grew rapidly and established itself as a cultural, religious, and trading center for the Maghreb and sub-Saharan Africa. Jemaa el-Fnaa is the busiest square in Africa. After a period of decline, the city was surpassed by Fez, but in the early 16th century, Marrakesh again became the capital of the kingdom. The city regained its preeminence under wealthy Saadian sultans Abu Abdallah al-Qaim and Ahmad al-Mansur, who embellished the city with sumptuous palaces such as the El Badi Palace (1578) and restored many ruined monuments. Beginning in the 17th century, the city became popular among Sufi pilgrims for its seven patron saints who are entombed here. In 1912 the French Protectorate in Morocco was established and T'hami El Glaoui became Pasha of Marrakesh and held this position nearly throughout the protectorate until the role was dissolved upon the independence of Morocco and the reestablishment of the monarchy in 1956. In 2009, Marrakesh mayor Fatima Zahra Mansouri became the second woman to be elected mayor in Morocco.Marrakesh comprises an old fortified city packed with vendors and their stalls. This medina quarter is a UNESCO World Heritage Site. Today it is one of the busiest cities in Africa and serves as a major economic center and tourist destination. Tourism is strongly advocated by the reigning Moroccan monarch, Mohammed VI, with the goal of doubling the number of tourists visiting Morocco to 20 million by 2020. Despite the economic recession, real estate and hotel development in Marrakesh have grown dramatically in the 21st century. Marrakesh is particularly popular with the French, and numerous French celebrities own property in the city. Marrakesh has the largest traditional market (souk) in Morocco, with some 18 souks selling wares ranging from traditional Berber carpets to modern consumer electronics. Crafts employ a significant percentage of the population, who primarily sell their products to tourists. Marrakesh is served by Ménara International Airport and by Marrakesh railway station which connects the city to Casablanca and northern Morocco. Marrakesh has several universities and schools, including Cadi Ayyad University. A number of Moroccan football clubs are here, including Najm de Marrakech, KAC Marrakech, Mouloudia de Marrakech and Chez Ali Club de Marrakech. The Marrakesh Street Circuit hosts the World Touring Car Championship, Auto GP and FIA Formula Two Championship races. 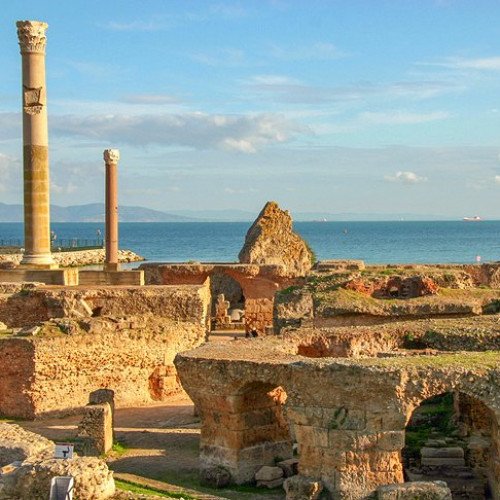 Carthage was the capital city of the ancient Carthaginian civilization, on the eastern side of the Lake of Tunis in what is now Tunisia. Carthage was the most important trading hub of the Ancient Mediterranean and one of the most affluent cities of the classical world. The city developed from a Phoenician colony into the capital of a Punic empire which dominated large parts of the Southwest Mediterranean during the first millennium BC. The legendary Queen Alyssa or Dido is regarded as the founder of the city, though her historicity has been questioned. According to accounts by Timaeus of Tauromenium, she purchased from a local tribe the amount of land that could be covered by an oxhide. The ancient city was destroyed by the Roman Republic in the Third Punic War in 146 BC and then re-developed as Roman Carthage, which became the major city of the Roman Empire in the province of Africa. The city was sacked and destroyed by Umayyad forces after the Battle of Carthage in 698 to prevent it from being reconquered by the Byzantine Empire. It remained occupied during the Muslim period and was used as a fort by the Muslims until the Hafsid period when it was taken by the Crusaders with its inhabitants massacred during the Eighth Crusade. The Hafsids decided to destroy its defenses so it could not be used as a base by a hostile power again. It also continued to function as an episcopal see. The regional power had shifted to Kairouan and the Medina of Tunis in the medieval period, until the early 20th century, when it began to develop into a coastal suburb of Tunis, incorporated as Carthage municipality in 1919. The archaeological site was first surveyed in 1830, by Danish consul Christian Tuxen Falbe. Excavations were performed in the second half of the 19th century by Charles Ernest Beulé and by Alfred Louis Delattre. The Carthage National Museum was founded in 1875 by Cardinal Charles Lavigerie. Excavations performed by French archaeologists in the 1920s first attracted an extraordinary amount of attention because of the evidence they produced for child sacrifice. There has been considerable disagreement among scholars concerning whether child sacrifice was practiced by ancient Carthage. The open-air Carthage Paleo-Christian Museum has exhibits excavated under the auspices of UNESCO from 1975 to 1984.