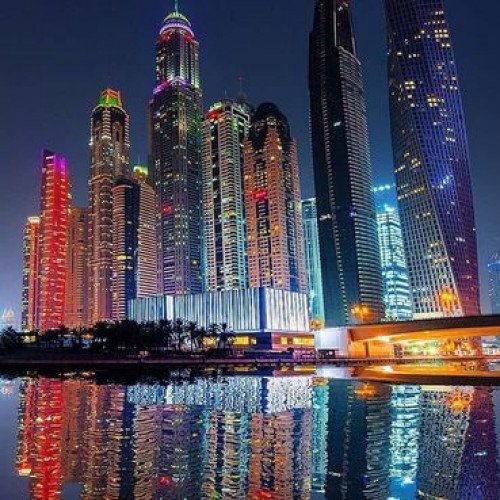 Dubai ( doo-BY; Arabic: دبي‎, romanized: Dubayy [dʊˈbajj], Gulf Arabic pronunciation: [dəˈbaj]) is the most populous city in the United Arab Emirates (UAE) and the capital of the Emirate of Dubai.Located in the eastern part of the Arabian Peninsula on the coast of the Persian Gulf, Dubai aims to be the business hub of Western Asia. It is also a major global transport hub for passengers and cargo. Oil revenue helped accelerate the development of the city, which was already a major mercantile hub. Dubai's oil output made up 2.1 percent of the Persian Gulf emirates economy in 2008. A centre for regional and international trade since the early 20th century, Dubai's economy relies on revenues from trade, tourism, aviation, real estate, and financial services. According to government data, the population of Dubai is estimated at around 3,400,800 as of 8 September 2020. 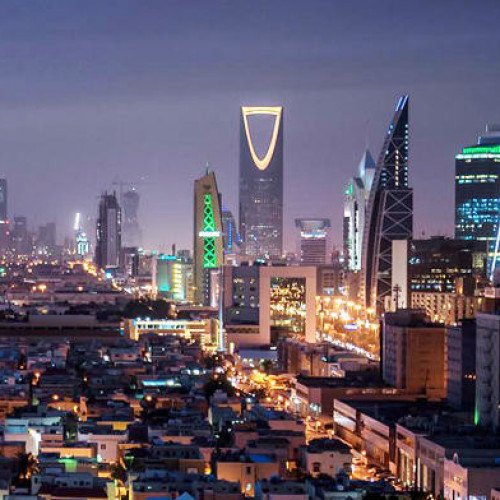 Riyadh (Arabic: الرياض‎, romanized: 'ar-Riyāḍ, lit.: 'The Gardens' [ar.riˈjaːdˤ] Najdi pronunciation: [er.rɪˈjɑːðˤ]) is the capital of Saudi Arabia and the largest city on the Arabian Peninsula. Located in the center of the an-Nafud desert, on the eastern part of the Najd plateau, the city sits at an average of 600 metres (2,000 ft) above sea level, and receives around 5 million tourists each year, making it the forty-ninth most visited city in the world and the 6th in the Middle East. Riyadh had a population of 7.6 million people in 2019, making it the most-populous city in Saudi Arabia, 3rd most populous in the Middle East, and 38th most populous in Asia.The first mentioning of the city by the name Riyadh was in 1590, by an early Arab chronicler. In 1737, Deham Ibn Dawwas, who was from the neighboring Manfuha, settled in and took control of the city. Deham built a wall around the city, and the best known source of the name Riyadh is from this period, thought to be referring to the earlier oasis towns that predated the wall built by Ibn Dawwas. In 1744, Muhammad ibn 'Abd al-Wahhab formed an alliance with the Emir of Dir'iyah, Muhammad bin Saud, and in 1774, they took Riyadh from Deham. However their state, now known as the First Saudi State, came to a collapse in 1818. Turki ibn Abdullah founded the Second Saudi State in the early 19th century and made Riyadh his capital in 1825. However, his reign over the city was disrupted by a joint Ottoman–Rashidi alliance. Finally, in the early 20th century, 'Abdulaziz ibn Saud, known in the west simply as Ibn Saud, retrieved his ancestral kingdom of Najd in 1902 and consolidated his rule by 1926 with the final Saudi conquest of Hejaz. After this he named his kingdom Saudi Arabia in September 1932 with Riyadh as the capital.Riyadh is the political and administrative centre of Saudi Arabia. The Consultative Assembly (also known as the Shura or Shura Council), the Council of Ministers of Saudi Arabia, the King and the Supreme Judicial Council of Saudi Arabia are all situated in the city. Alongside these four bodies that form the core of the legal system of Saudi Arabia, the headquarters of other major and minor governmental bodies are also located in Riyadh. The city hosts 112 foreign embassies, most of which are located in the as-Safarat district or Diplomatic Quarter (Arabic: حي السفارات, romanized: Hayy as-Safarat, lit.: 'District of Embassies') in the western reaches of the city. Riyadh also holds great economic significance, as it hosts the headquarters of many banks and major companies, such as the National Commercial Bank (NCB), Alinma Bank and the Saudi Arabian British Bank (SABB). Highway 65, known locally as the King Fahd Road, runs through some of these important centers in the city, including the King Abdullah Financial District, one of the world's largest financial districts, the Faisaliyah Center and the Kingdom Center. Riyadh is one of the world's fastest-growing cities in population and is home to many expatriates. Riyadh has been designated a global city.The city is divided into 15 municipal districts, which are overseen by the Municipality of Riyadh (Arabic: أمانة الرياض, romanized: Amanat ar-Riyad, lit. 'Protectorate of Riyadh') headed by the mayor; and the Royal Commission for Riyadh which is chaired by the Governor of the Province, Faisal bin Bandar Al Saud. As of July 2020, The mayor is Faisal bin Abdulaziz bin Mohammed bin Ayyaf Al-Muqrin. Most of the population of the Riyadh Province is concentrated around Riyadh, as the rest of the province is mostly desert, with few, small cities connected by small two- to four-lane highways, such as Wadi ad-Dawasir.