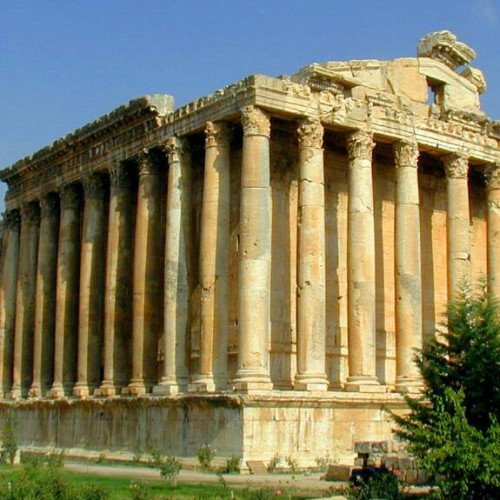 Baalbek (; Arabic: بعلبك‎, romanized: Baʿlabakk, Syriac-Aramaic: ܒܥܠܒܟ) is a city located east of the Litani River in Lebanon's Beqaa Valley, about 67 km (42 mi) northeast of Beirut. It is the capital of Baalbek-Hermel Governorate. In Greek and Roman times Baalbek was also known as Heliopolis (Ἡλιούπολις, Greek for "Sun City"). In 1998 Baalbek had a population of 82,608, mostly Shia Muslims, followed by Sunni Muslims and Christians.It is home to the Baalbek temple complex which includes two of the largest and grandest Roman temple ruins: the Temple of Bacchus and the Temple of Jupiter. It was inscribed in 1984 as an UNESCO World Heritage site. 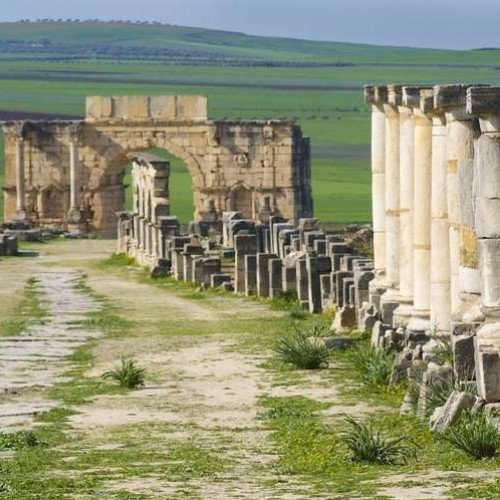 Volubilis (Latin pronunciation: [woˈlu.bi.lis]; Arabic: وليلي‎, romanized: walīlī; Berber languages: ⵡⵍⵉⵍⵉ, romanized: wlili) is a partly excavated Berber city in Morocco situated near the city of Meknes, and commonly considered as the ancient capital of the kingdom of Mauretania. Built in a fertile agricultural area, it developed from the 3rd century BC onward as a Berber, then proto-Carthaginian, settlement before being the capital of the kingdom of Mauretania. It grew rapidly under Roman rule from the 1st century AD onward and expanded to cover about 42 hectares (100 acres) with a 2.6 km (1.6 mi) circuit of walls. The city gained a number of major public buildings in the 2nd century, including a basilica, temple and triumphal arch. Its prosperity, which was derived principally from olive growing, prompted the construction of many fine town-houses with large mosaic floors. The city fell to local tribes around 285 and was never retaken by Rome because of its remoteness and indefensibility on the south-western border of the Roman Empire. It continued to be inhabited for at least another 700 years, first as a Latinised Christian community, then as an early Islamic settlement. In the late 8th century it became the seat of Idris ibn Abdallah, the founder of the Idrisid dynasty of Morocco. By the 11th century Volubilis had been abandoned after the seat of power was relocated to Fes. Much of the local population was transferred to the new town of Moulay Idriss Zerhoun, about 5 km (3.1 mi) from Volubilis. The ruins remained substantially intact until they were devastated by an earthquake in the mid-18th century and subsequently looted by Moroccan rulers seeking stone for building Meknes. It was not until the latter part of the 19th century that the site was definitively identified as that of the ancient city of Volubilis. During and after the period of French rule over Morocco, about half of the site was excavated, revealing many fine mosaics, and some of the more prominent public buildings and high-status houses were restored or reconstructed. Today it is a UNESCO World Heritage Site, listed for being "an exceptionally well preserved example of a large Roman colonial town on the fringes of the Empire".