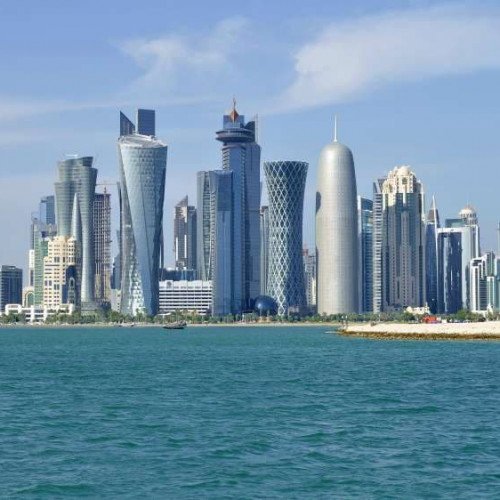 Doha (Arabic: الدوحة‎, ad-Dawḥa or ad-Dōḥa, pronounced [adˈdawħa]) is the capital and most populous city of the State of Qatar. It has a population of 956,460 (2015). The city is located on the coast of the Persian Gulf in the east of the country, North of Al Wakrah and South of Al Khor. It is Qatar's fastest growing city, with over 80% of the nation's population living in Doha or its surrounding suburbs, and it is the political and economic center of the country. Doha was founded in the 1820s as an offshoot of Al Bidda. It was officially declared as the country's capital in 1971, when Qatar gained independence from being a British Protectorate. As the commercial capital of Qatar and one of the emergent financial centers in the Middle East, Doha is considered a beta-level global city by the Globalization and World Cities Research Network. Doha accommodates Education City, an area devoted to research and education; Hamad Medical City, an Hamad Medical Corporation administrative area of medical care which includes Hamad General Hospital, Heart Hospital, Women's Wellness, and Research Center and Qatar Rehabilitation Institute as well as a number of specialty clinics and support infrastructure. Finally, it also includes Doha Sports City, or Aspire Zone, an international sports destination that includes Khalifa International Stadium, a FIFA WorldCup 2022 stadium, as well as Hamad Aquatic Center, and the Aspire Dome. The city was host to the first ministerial-level meeting of the Doha Development Round of World Trade Organization negotiations. It was also selected as host city of a number of sporting events, including the 2006 Asian Games, the 2011 Pan Arab Games and most of the games at the 2011 AFC Asian Cup. In December 2011, the World Petroleum Council held the 20th World Petroleum Conference in Doha. Additionally, the city hosted the 2012 UNFCCC Climate Negotiations and is set to host the 2022 FIFA World Cup. The city has also hosted the 140th Inter-Parliamentary Union Assembly in April 2019. 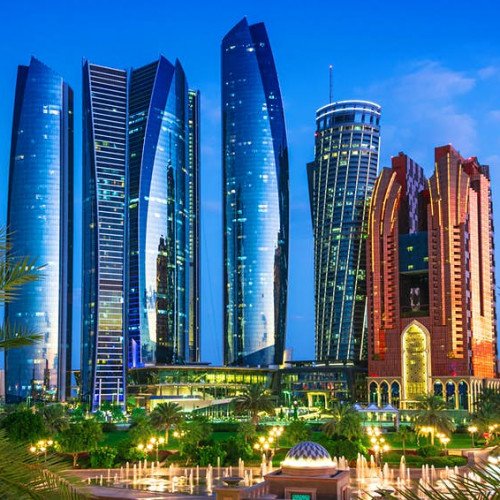 Abu Dhabi (UK: , US: ; Arabic: أَبُو ظَبْيٍ‎ Abū Ẓaby Arabic pronunciation: [ɐˈbuˈðˤɑbi]) is the capital and the second-most populous city of the United Arab Emirates (after Dubai). The city of Abu Dhabi is located on an island in the Persian Gulf, off the Central West Coast. Most of the city and the Emirate reside on the mainland connected to the rest of the country. As of 2020, Abu Dhabi's urban area had an estimated population of 1.48 million, out of 2.9 million in the emirate of Abu Dhabi, as of 2016.Abu Dhabi houses local and federal government offices and is the home of the United Arab Emirates Government and the Supreme Petroleum Council. The city is home to the President of the UAE, who is a member of the Al Nahyan family. Abu Dhabi's rapid development and urbanization, coupled with the massive oil and gas reserves and production and relatively high average income, have transformed it into a large, developed metropolis. It is the country's center of politics and industry, and a major culture and commerce center. Abu Dhabi accounts for about two-thirds of the roughly $400 billion UAE economy.