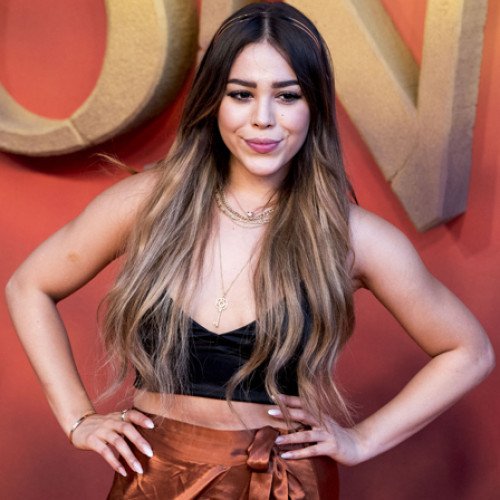 Danna Paola Rivera Munguía (born 23 June 1995) is a Mexican actress, singer and model. She gained popularity as a child actress and singer, starring in dozens of television projects throughout her early childhood and adolescence. Danna Paola was born and raised in Mexico City, Mexico. She is the daughter of Patricia Munguía and Juan José Rivera Arellano, the former singer of Grupo Ciclón and Los Caminantes. Her parents divorced during her childhood. She has an older sister, Vania.[1] Danna Paola's acting career began in 1999 when at age 4 she and her sister attended Televisa's casting call in Mexico City for Plaza Sésamo, the Mexican version of Sesame Street. Both were later cast on the show and appeared in several episodes.[2] One year later at age 5, she was cast in the telenovela, Rayito de Luz, in 2000. In 2001, she received her first lead role in the children's telenovela, María Belén. The same year, she released her debut album, titled Mi Globo Azul. In 2004, she was chosen as the lead in the successful children's series, Amy, la niña de la mochila azul. Her second studio album, Océano, soon followed. A year later, she was the female lead of Pablo y Andrea, the television adaptation of the classic novel, The Adventures of Tom Sawyer. Over the next several years, she earned parts in multiple television series produced by Televisa.[citation needed] In 2009, she was cast as "Patito" in Atrévete a Soñar, the Mexican remake of the popular Argentine children's telenovela, Patito Feo.[3] Danna Paola filmed two seasons of the show and production was concluded in late 2009. Atrévete a Soñar marked Paola's transition from children's to teen telenovelas. Paola and the cast of the telenovela recorded two soundtracks and toured across Mexico, in order to promote the show.[4] The telenovela and its soundtrack were commercially successful throughout Mexico and Latin America. The soundtrack was certified double platinum in Mexico.[5] In late 2010, she voiced "Rapunzel" for the Latin American Spanish-language dubbing of the Disney film"Tangled"[6] and participated in the film's Spanish-language soundtrack.

The best female pop star in Latin America 100 %
0 % She is a great singer, but not the best 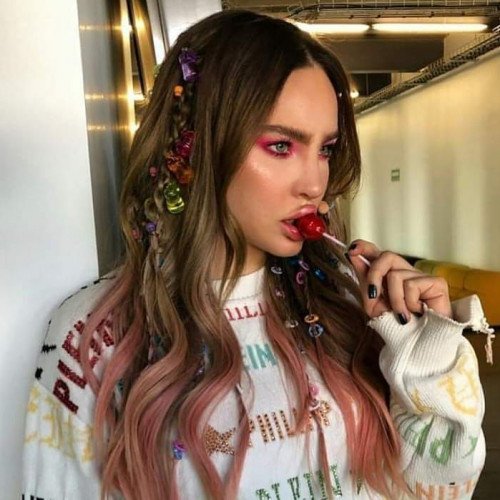 Belinda Peregrín Schüll (born August 15, 1989 or 1992),[A] commonly known as Belinda, is a Mexican singer, songwriter and actress. She has lived in Mexico City, Mexico since a young age. In 2000, she started her career as a child actor at the age of 10 when she was cast as the lead role in the Mexican children's telenovela Amigos x siempre. She later appeared in Aventuras en el tiempo (2001) and Cómplices Al Rescate (2002).[2] Her self-titled debut studio album Belinda (2003), was a commercial success, selling over 1,1 million copies worldwide.[2] The album spawned many successful singles, including her debut hit single "Lo Siento" and "Vivir", the main theme of the 2004 telenovela Corazones al límite. Following her departure from Sony BMG and management in 2005, Belinda's second album Utopía (2006) earned her two Latin Grammy Awards nominations and was certified platinum in Mexico.[3] It contained the top-ten singles "Ni Freud ni tu mamá", "Bella Traición" and "Luz Sin Gravedad".[4] Belinda has also appeared in motion pictures, including the Disney Channel Original Movie The Cheetah Girls 2 (2006), and has dubbed voice roles for The Tale of Despereaux (2008) and Las aventuras de Tadeo Jones (2012). Her return to Mexican telenovelas in Camaleones (2009) and the TV series Mujeres asesinas 3 (2010), inspired her subsequent third album Carpe Diem (2010), which spawned the hit single "Egoísta".[5] Her fourth album Catarsis (2013), debuted at number-one in her native Mexico, and was preceded by the hit singles "En El Amor Hay Que Perdonar" and "En La Obscuridad".[6] In 2017, Belinda was an extra on the film Baywatch, starring Dwayne Johnson and Zac Efron.[7] Together, her four studio albums, singles and soundtracks has sold over 3 million copies making her the third best-selling female Mexican act.[8][9] The international press have named her the "Princess of Latin Pop".[10] As 2020, she is one of the coaches of the Mexican singing competition show, La Voz on TV Azteca after being acquired from Televisa after 7 seasons.

The best female pop star in Latin America 50 %
50 % She is a great singer, but not the best